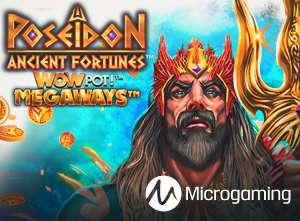 A leading and well-known casino provider, Microgaming, announced that its online slot Ancient Fortunes: Poseidon WowPot Megaways, raffled off a huge jackpot of €3.8 million at the Videoslots platform. A lucky Swedish player generated a massive win just few days after this game was released on the developer’s operator sites.

Ancient Fortunes: Poseidon WowPot Megaways was developed by Triple Edge Studios and this online slot is the first to use Big Time Gaming's innovative Megaways mechanics. This slot is combined with a progressive jackpot WowPot, which was the first time it was introduced to players 7 months ago. This is the second largest WowPot win which happened just a few months after the record-breaking win on Absolootly Mad: Mega Moolah. This is 4th millionaire achieved by WowPot's progressive jackpot.

In 2021, Microgaming's progressive jackpot network generated 2.6 million in winnings across all jackpots and games, valued at over €140 million!

John Coleman, CEO at Microgaming, commented: “It’s amazing to see another massive WowPot win dropping just days after Ancient Fortunes: Poseidon WowPot Megaways was released network-wide to our customers. Congratulations to Videoslots on this impressive payout, and to their player in Sweden.”

William Ahlberg, Head of Commercials at Videoslots, added: “We’re thrilled to provide our players with access to many of Microgaming’s legendary progressive jackpot slots – and even more so that one of our players has taken home the latest WowPot win, becoming a multi-millionaire!”

About the Leading Software Brand

Microgaming is a gaming provider that has been around since the early days of the online gaming industry. The company was established in 1994 and is one of the largest casino providers in the world. Its products include online casino games that are compatible with tablets and mobile devices. The brand offers a variety of casino solutions including poker, live dealers, bingo, and sports and business solutions. Its most popular games are Break Da Bank, the unprecedented Mega Moolah, Immortal Romance and others. In 2010, it launched Quickfire, which is more focused on creating online slots. It is a company that supports its third-party games and white-label casino platforms. Microgaming employs over 2,000 people and operates from headquarters based in the Isle of Man.