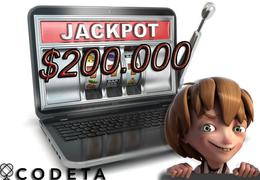 There are a lot of interesting things that happen with all of the odds involved in online slots, and you can see that in a major way with a big winner picked up a major prize recently at Codeta. This win was worth about €200,000, but what makes the win so interesting on top of how large it happens to be is the fact that the exact same player took home a different six-figure jackpot just the week before.

About The Lucky Player

Fredrik is the name of the online slots fan who picked up the back-to-back payouts. This €200,000+ payout came after big wins on two titles by Play N Go titled Easter Eggs and Golden Legend. This is the largest individual payout in the history of the casino, and it's a good example of how major payouts don't always have to come in the form of individual jackpots. Because this win was made up of multiple smaller wins, it shows that there are several different ways that you can take down a big score.

This lucky player's previous payout of around €100,000 came on a different game. It was Net Entertainment's Jack and the Beanstalk that did it that time, a very popular game with excellent graphics and a lot of features. Fredrik noted that he was on a crazy winning streak, which has been called the biggest winning streak of the year. It's probably going to be the best streak for quite a while for Codeta unless he ends up adding another major payout to it soon, which we have seen is quite possible.

There have been a lot of major payouts in 2016, but something we've also seen a lot of is that not all of them have come from progressive jackpots. More and more, we're seeing people pick up big winning streaks from regular sessions on their favorite games, and sometimes it happens across multiple titles. This is what's happened with Fredrik on his €200,000 payout, and it's great to see people picking up big wins right before the turn of the year.