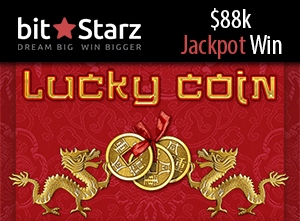 Players who enjoy playing at BitStarz do so for a lot of different reasons, but the fact that they run using bitcoin as their primary banking method is a big factor. They've recently announced a big winner at one of their games as well, and a lucky player had the right timing needed to hit a jackpot worth 54.7 bitcoin on the Lucky Coin slot.

Details on This Jackpot Win

This win of 54.7 bitcoin was worth about $88,860.65 based on the exchange rate at the time, and that's a pretty sizable payday. The game being played, Lucky Coin, was produced by Amatic. What makes this win even more remarkable is that it was the same game that paid out over $47,000 worth on a single spin just a couple of weeks prior to this larger win. It seems like this game might be hot, and that will bring even more players to want to take their shot at it.

Right now at BitStarz, there is a promotion going on called the Extra Wars. This sees players getting a chance to win a piece of €1,000 every three days just for playing games from Amatic or Endorphina. If you're a fan of these video slots from these top-tier providers, then you should definitely check out what this promotion has to offer. You could very easily end up as the next big winner, and it wouldn't be surprising at all considering how many large prizes they have been paying out lately.

Since 2014, BitStarz has been offering players an opportunity to play popular online casino games using bitcoin. It's the only payment option they have available, and it allows players a lot of advantages based on the anonymous and private nature of transactions with the cryptocurrency. They've shown that they are reliable when it comes to cash outs in spite of using only this particular method, and they have plenty of customer service representatives who are standing by at all times to help you with anything that you need, including helping you to get in deposits and withdrawals with bitcoin if you are unfamiliar with the process.