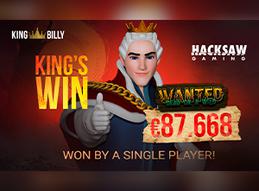 The proud owner of 20 awards, from the most respected iGaming events, King Billy Casino demonstrates its value where it counts most - in player income. Fortunate punter at King Billy generated a massive win of €87,668 with a bet of €10. A lucky player was spinning the reels in Hacksaw Gaming’s exciting western adventure called Wanted Dead or a Wild.

Not long ago, King Billy also changed the life of a German player with a huge win of €204,399 with NetEnt's online slot Dead or Alive II. Moreover, a Danish player won an even bigger prize of €313,542 by playing a live roulette game, developed by Evolution Games.

A lucky winner, Sami B from the Nordics, said: “I can’t really explain how I really feel, it’s hard. To be honest, when I saw that I won 88.000 Euros from a 10 Euros bet, I just looked at my screen for 5 to 7 minutes. It took some time to realize and after a week or two it feels more than amazing!”

King Billy Casino CEO Volodymyr Harkusha, commented: “King Billy is a multiple times awarded casino. But, frankly speaking, awards count mostly for us. Winning is what counts for the players!

More on the Multiply Awarded Brand

King Billy Casino is an online casino that has a range of exciting slots developed by the most trusted brands in the iGaming industry. Microgaming, NetEnt, Endorphina, BetSoft, iSoftBet, and games from many other industry giants are available on their website. Their content is translated into multiple languages and English, German, Norwegian and Finnish speaking players can play their favorite titles on this website. This casino provider operates under the license issued by the Curacao authority. Slots lovers here can enjoy a wide range of slots such as Aztec Gold, Ali Baba's Luck, Book of Cats and more. In addition, the site hosts also many table games including American roulette, European roulette, French roulette, single deck blackjack, classic blackjack and more. The range of poker games offers several options such as Caribbean Poker, Texas Hold'em, Oasis Poker, and many more.