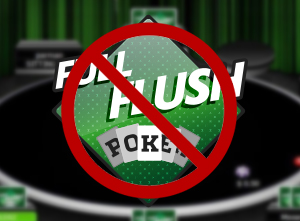 Full Flush Poker is a dead online poker room that was initially launched as the main room of the Equity Poker Network, an emerging online poker network that was supposed to be a non-profit type of venture. Previously, the poker room and the network both shut down around the same time, and an estimated total of over $2 million was left owed to players, affiliates and others associated with the venture in various ways.

In a new twist, the domain name for this now-defunct room was purchased, and a warning was put up on it about everything the new domain owners know about the proceedings from this room.

The very first thing that you'll notice if you navigate to that web address right now is that there is a massive disclaimer at the very top of the page. This disclaimer points out that the new owners of the domain have nothing to do with the previous owners, so they aren't responsible for anything that actually went on with Full Flush Poker, and they aren't liable for (nor do they have) anyone's money. From there, it breaks down into a large amount of information what what is going on with that company and offers a number of warnings.

Of the various things you will find on the website, a very important piece of information is that it's believed the owners of Full Flush Poker ran off from the countries in which they were previously located and are not maintaining contact with anyone publicly. No one really knows where they are, which is obviously a problem since it makes getting back any of that money virtually impossible.

It also points out that there is a fund that has been set up asking for bitcoin donations to get together a legal fund to go after the previous owners, but players are warned that this could be a scam because no one can really figure out who is running it. It's also worth pointing out that bitcoin donations would be impossible to get back if it was, in fact, a scam.