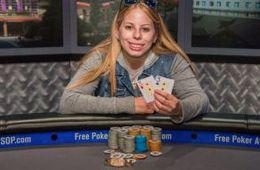 They say that the apple doesn't fall far from the tree, and in the case of Joel and Loni Harwood, that seems to be the case. Joel is known for being a professional in the game, and his daughter Loni (also a professional poker player) picked up a win at the 2015 World Series of Poker National Championship. This is an impressive win in an important tournament, and it probably goes a long way towards establishing her own legacy and getting out from the shadow of her father.

Details on the Win

A total of 122 players were in this event for the $10,000 entry fee, and it picked up a total prize pool of just over $1.2 million. First place was worth $341,599, and that's a pretty sizable win for Loni Harwood. She was near the head of the pack for most of the tournament, and she commanded a large chip lead for quit a while. Her main competition was Alex Masek, a player from North Carolina with eight WSOP circuit event rings. He was able to pick up second place for a solid $211,599 prize. It's also worth noting that Daniel Negreanu placed sixth in this event for $63,647.

The World Series of Poker Circuit events have a world championship cycle that's based on a total of 200 players competing in a $10,000 buy-in tournament. A total of 100 players are able to earn themselves seats by picking up top positions on the circuit leaderboard or picking up certain championship or circuit main event wins. Those 100 players get a free seat, and another 100 players are able to get in via invite only, and they have to pay the $10,000 fee for entry.

Loni Hardwood now lives in Florida after graduating with a finance degree from the State University of New York back in 2012. She's a professional poker player who tours with the World Series of Poker Circuit. She won two circuit event rings in 2012, and she picked up her first bracelet at the 2012 edition of the World Series of Poker. Harwood was also able to take down $874,698 in total winnings at the 2013 WSOP, and that was a record for winnings at a single WSOP.