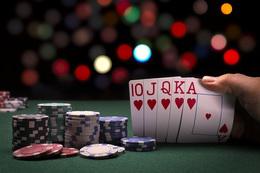 The Main Event of the World Series of Poker is playing out this coming Sunday as a part of the "November Nine" concept that was created to help get more interest in poker. The idea behind this concept is that coverage of the tournament series normally happens over a course of a few months, normally after the winner of the Main Event had already been decided. By having the actual final table play live months later, it provides a climatic finish to fans of the series.

There are two big names being thrown around right now as the biggest possibilities for winning the event. The first is Joe McKeehan from the United States, and he is the chip leader by far going into the final table. He's also been on a big of a tear lately, and he's performed well in a number of events. Also being mentioned is Max Steinberg, the only player at the table to already have a World Series of Poker bracelet. His chip count puts him near the middle of the field, but he's very likely the most proven player in the bunch, having amounted significant success in both online poker and in live events.

The prize pool here was worth $60,348,000 total with 6,420 players putting up $10,000 apiece. It took over a week of play to get this group down to the final nine who will duke it out on Sunday. First place will be worth $7,680,021, up there with the biggest payouts for progressive online slots to give non-poker fans an idea of the importance of this tournament.

Chip leader McKeehan will start the final table with about one-third of the chips in play with about 63.1 million. Zvi Stern of Israel has 29.8 million, Neil Blumenfield from the USA sports 22 million, and Pierre Neuville of Belgium has 21.1 million. Bracelet holder Max Steinberg has a fairly average stack of about 20 million to work with. Thomas Cannuli, Joshua Beckley and Patrick Chan, all from the United States, have 12.3, 11.8 and 6.2 million, respectively. The smallest stack is Federico Butteroni of Italy, who also has about 6.2 million in his stack.