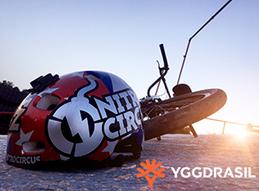 The latest Yggdrasil slot release has come recently in the form of Nitro Circus. This BMX-themed game was launched with a big event recently in Malta that helped to mark off the launch of their first branded slot, and that comes along with the territory since Nitro Circus is the biggest brand for these types of extreme sports in the world.

Details on the Event

Over 100 industry figures were hosted for a big barbeque at this event where they watched two major BMX riders, Todd Meyn and Kurtis Downs, put on a very serious performance. This is the type of thing that gets a lot of attention in the industry because it's not like all software developers are putting on big events like this, and it's cool to see how comprehensive their work has been on everything to do with this new game release.

Something that Yggrasil Gaming has been developing over the past couple of years is their Slot Shots series, which this title is a part of. This series is developed in a way that slot tournaments are much easier to build out, and guests at the event participated in such a tournament to show off the features. This ties in with their BOOST element, which makes it easier for players to share what they have accomplished with their winnings and play on various types of social media.

In short, we're seeing them integrate several parts of their product into one cohesive and highly entertaining unit, which we love to see.

There's no much time left in 2018, and they're making sure that they make the most of it. The new release of Nitro Circus is just one of a number of serious moves they have made so far in this calendar year to build themselves up more and more. Their titles are in front of more players than ever before, and they are definitely serious about getting players excellent titles that set standards in the industry when it comes to what to expect. By setting the tone in this way, other providers have to play catch-up to a real degree.