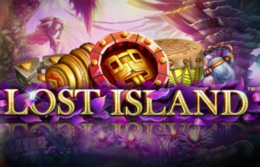 It has been a busy summer for Swedish online casino software developers, Net Entertainment. Last month, their Mega Fortune Dreams progressive jackpot slot was released. This follows on from Aliens, Lights, Wish Master, and a handful of other new games that they have launched this year. Over the next few months, we can also expect South Park Reel Chaos, Attraction and Go Bananas to be launched. For the moment though, all the talk is of their latest creation, the mystical and magical Lost Island video slot.

Lost Island has actually come as something of a surprise. Unlike some of their bigger slots, Net Entertainment actually kept this game’s development under wraps until it was just a few weeks from launch. Having gone live this week though, its presence is well known. So, what’s the scoop with the new game?

The Lost Island video slot is designed in typical Net Entertainment fashion, meaning that it has their basic gameplay structure of 5 reels and 20 paylines. Both of these are blended well into the background, with the enchanting theme of the title closely resembling the mysteries of the lost continent of Atlantis. At least, that’s the general consensus. Other notable features of this new slot’s gameplay are a multiplier bar, which is located above the reels. Every single time that a wild is encountered on the reels, the wild multiplier bar will rise. The highlighted multiplier will then be added to the player’s winning paylines. As you can imagine; the more wilds you have on the reels when you win a payline, the bigger and better your winnings are going to be. The wild multipliers reset to 1x after every spin, and players can win up to 5x the normal pay-outs with this feature.

As far as actual special features go, there is a free spins feature in this particular slot. Lost Island’s free spins feature can see players win up to 30 free games, by acquiring scatter icons anywhere on the reels. The more scatters they get, the more free spins they will trigger. During free spins, the wild multiplier remains active, and a sticky wild is located in the centre of the third reel. This wild will remain locked in place for the duration of the free spins bonus round. This wild icon is perfectly placed to provide players with plenty of opportunities to pick up big wins.

Net Entertainment has launched this title at a handful of online casinos currently powered by their software, or running their games. It is expected that within a week or two, Lost Island will be available at most online casinos offering software by this up and coming online slots giant.