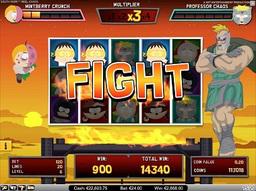 Medusa II, Mega Fortune Dreams, Avalon II: The Quest for the Grail; it seems that the sequel craze is catching on fast. Hot on the heels of producing their Mega Fortune Dreams sequel slot, Net Entertainment is at it again this month. This week, the Scandinavian online casino software developers recently announced that they are working on a sequel to their hugely popular South Park online video slot.

The new slot will be called South Park Reel Chaos, and just like its predecessor, the sequel will contain Cartman, Stan, Kyle and Kenny, as well as whole host of characters from the hit television cartoon. The new South Park Reel Chaos slot will actually see the swearing, obscene little foursome take up the mantle as superheroes, as they are put to work defending their quiet little mountain town against Professor Chaos and his legions of thugs.

Players won’t be surprised to learn that there are 5 reels and a total of 20 paylines available to them in this title. With Net Entertainment’s usual wagering structure in place, it promises a minimum wager spin costing just 20p a pop.

As far as the special features go, Net Entertainment are keeping their cards pretty close to their chest. At least until the game nears its launch date. What is known is that wild icons will appear stacked for the first time in the slot. There will also be plenty of multipliers and re-spins where multipliers are added to the wins. Special wild icons and the customary free spins round are also thought to have been included in the new slot’s gameplay structure.

By contrast, we know next to nothing concrete about the actual bonus round. From what can be ascertained; South Park Reel Chaos will contain four bonus rounds, which are more than likely triggered in the same manner as in the previous title – by acquiring bonus icons on the third, fourth and fifth reels. All four of the bonuses could lead to a showdown with the nasty Professor Chaos, in a bonus round that is known to be called the Epic Bonus Spins feature. A brief preview of the new slot has shown that multipliers can be acquired in this bonus, and a Victory Bonus is theirs if they beat all their foes.

The new South Park slot isn’t expected until towards the end of summer – perhaps a month or more away. Most of the information available on the new game comes from a video preview, which Net Entertainment launched this week.

This summer has already seen many sequels blast onto the online gambling scene, and there are signs of many more to come. If South Park Reel Chaos is only half as successful as its predecessor, it will make for a cracking addition to many Net Entertainment powered casinos’ libraries, this year.