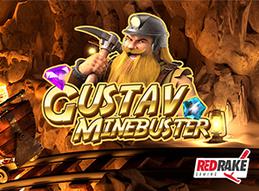 Developer Red Rake Gaming is ending the year on a high note with another innovative slot release.

Gustav Minebuster takes punters on a journey deep below the Earth. In the depths of the magical and mysterious mine, many treasures await.

In order to obtain these treasures, players will have to blast their way through the 8x8 grid. To help them along, there are many engaging features.

This new video slot breaks with convention by having a cascading system where winning combinations are formed by symbols touching vertically or horizontally.

…once a win is made, the symbols disappear and new ones fall into their place. It’s all about getting big cascades that activate features and lead to big wins.

It’s a very innovative approach to slot design, seen before in other high-end titles like Rich Wilde and the Tome of Madness by developers like Play’n Go.

A big part of mining are explosions and dynamite, and that’s why there are explosive gimmicks here to delight and entertain all players who decide to brave the depths of the mineshaft.

Starting with the title character, who is a dwarf with a huge bead, the wild symbol bearing his face is sticky. During each respin, the symbol stays in place thus enabling more cascades and increasing the potential for more wins.

There are multipliers too, which are tied to the cascading mechanic. Every time the wild participates its multiplier goes up by one.

And there’s dynamite also. Obviously, no mining themed game could ever do without these exploding sticks.

What they do in this game is randomly come to the reels and turn nearby symbols into high paying gem symbols of the same kind.

…and it’s the one everyone likes. Yes, it’s extra spins. Get four or more respins and a certain number of extra spins will be awarded.

When it comes to the atmosphere and features, Red Rake Gaming has really dug up gold.

Another excellent thing about this new release is the mobile-friendliness. As is expected from high-end releases, you can play on your desktop computer or on mobile devices. Smartphones and tablets are totally supported and it’s possible to play in both landscape and portrait orientations.

Red Rake is a team of 40 igaming industry experts that have been making online real money gambling products since 2011. They got their start as a social casino developer cornering this very dynamic and demanding market.

As of 2016, they brought their social experience into the real money gambling sphere. The company quickly became one of the top B2B suppliers of various casino content to casino operators in regulated markets around the world.

They have previously released such games as Cai Shen 88 and Twin Harlequin.