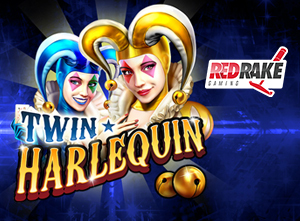 This new five-reel and the three-row game is all about big win chains, cascading reels, and dual roulettes that grand instant wins and extra spins.

It’s called Twin Harlequin and it stars a pair of harlequin twins. They play the role of the lowest paying symbols but they make up for it by often appearing fully stacked on the reels thus creating more possibilities for a win.

The developer of this game is also known for making many different roulette games and innovating in that area.

So with this release, they’ve infused some of the table game innovation into the slot offering.

Here’s how it works. The game has tumbling reels which means winning symbols disappear to make room for new ones that drop in from the top of the grid.

If players are lucky this can lead to long cascades of winning combos. There is a meter to the left of the grid that keeps track of how many respins there were. Once the number of respins hits five punters will get to spin the two roulette wheels to claim prizes.

It doesn’t end with just five respins though, because the meter goes up to 7. Each respin above the fifth will give out one additional spin on the bonus roulette meaning a maximum of three spins is possible.

And once the wheels start spinning…

…punters can expect prizes in the shape of instant cash wins and extra spins. To determine which of the wheels will spin a small one symbol slot is used. The symbols that can land represent which wheel will spin, the yellow wheel which grants cash prizes or the blue wheel that grants extra spins.

It is also possible to get both wheels to spin at the same time by getting the appropriate special symbol.

Also, some symbols will have a number on them which denotes the number of times the wheel will spin. It’s possible to rake up quite a few spins this way.

And what’s even better – the bonus roulette can be triggered even in extra spins mode which can lead to long strings of bonuses. The developer Red Rake is promising that it is possible to get more than 100 extra spins in a single game.

Red Rake is a group of more than 40 igaming industry professionals that have been making online real money gambling products since 2011. Starting out as a social casino developer they have since moved into producing slots and table games for real money venues. As of 2016, the company is a B2B supplier of casino content to the many casino operators around the world.

Their previous release was Cai Shen 88, a game dedicated to the Taoist deity Cai Shen who is the god of wealth and money.