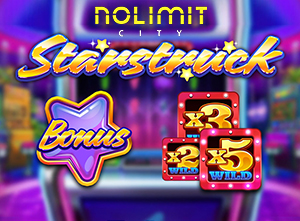 Stockholm-based indie games developer Nolimit City has recently announced its latest addition to an ever-growing portfolio of exciting and visually appealing video slots. The title is called Starstruck, and it is sure to leave players feeling exactly that as they spin their way to big wins and even bigger bonuses.

Starstruck Stands Out From the Pack

Nolimit City is capitalizing on its momentum from the widely acclaimed Owls slot released in February and following it up with this gorgeous title. Where Owls was innovative and fantastical, Starstruck goes back to basics in an engaging and updated way.

The slot features a simple 3x3 layout, and the symbols are reminiscent of the classic fruit slots. The graphics are cutting edge and brightly colored, however, so there is no concern about getting bored here. In fact, despite their classic nature, every symbol featured on the reels is so bold and well-designed that they seem to jump off the screen.

In addition, Nolimit City has designed Starstruck with HTML5, which means that this game can be enjoyed on desktop or mobile, and players can seamlessly transition from one screen to another without a loss of quality.

One of the best features of this game is its intuitive simplicity. There are no complicated betting structures or convoluted bonus features to figure out. Starstruck offers a straightforward, five-line experience and an easy-to-understand bonus mode that awards clear-cut multipliers for big paydays.

To activate the bonus mode, players must land the star symbol in the center of the reels. Once the star is locked in, high-value multiplier stars will appear to give users an opportunity to score up to 1,000x their initial win.

The intuitive, simple interface combined with frequent base wins, exciting multiplier opportunities and wild symbols makes this game a "best of both worlds" title that is easily accessible to players of any skill level.

Nolimit City Product owner Per Lindheimer commented that it "isn't an easy thing [to design] a classic 3x3 slot with a high hit frequency," but Starstruck delivers exactly that.

The base game offers an impressive number of decently sized wins, and triggering the Starstruck! bonus multiplier feature adds just enough excitement to give a consistently engaging experience without being overwhelming or overly volatile.