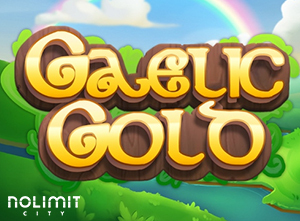 Malta-based software provider Nolimit City has entered March with a bang by launching its hair-raising release, Barbarian Fury. Now the brand is setting the scene for the next big release of the month - Gaelic Gold slot.

With an engaging theme...

…the title offers a unique approach to a familiar kind of slot-machine with its lavishly green valleys, hill-top mountains and rainbow dreams visuals.

The Irish folklore influence, enhanced by a classic touch that seasoned players may be familiar with, is very appealing to the eye, but also offers exciting gameplay.

A Perfect Game for the Festive Holiday

Saint Patrick's Day is a global celebration of Irish culture and its heritage. It is one of the most festive holidays that people can’t wait to come every year. The launch of this slot was timed perfectly. It has hit the market on March 16, just in time to be a true homage to the upcoming holiday.

Per Lindheimer, Product Owner at Nolimit City, has this to say about the company’s latest addition:

“St. Paddy’s Day draws near, and with that Nolimit will go full-on with the ol’ Irish folklore with Leprechauns, shamrocks and hopefully luck o’ the Irish. Bringing the xNudge® mechanic into a 3x3 reel set creates an exciting video slot that also changes its characteristics for each won, or bought, bonus round!"

What About The Gameplay And Special Features?

This video slot comes with a 3x3 grid, 5 paylines and slightly above-average RTP of 96.15% action. This setup puts it into the classic category, but its gameplay is enriched with some modern features. Like nudging stacked wilds that increase a multiplier with every nudge!

… players can look forward to Rainbow Spins. Look out for Pot of Gold Bonus symbol – when it appears in the middle position on reel 2, it will activate this feature that brings a minimum of 5 extra spins.
Before the round of extra spins commences, additional modifiers may be added by picking from the 9 available coins.

Player has the chance to pick at least 1 of the coins who include:

The Rainbow Lines modifier is quite useful since it gives a punter opportunity to play with 9 paylines as opposed to the standard 5.

...the most significant modifier will be the Extra Win Multiplier since it can help the multiplier to rise quite high.

Players who can’t wait to start the Rainbow Spins feature, don’t have to rely on the bonus symbol which might or might not land on the required position. This bonus round is available for purchase, for the cost of 50x your total stake. Something that makes this game to pop amongst the numerous new slots launched recently.

Nolimit is famous for this option as it used it in its other releases like Barbarian Fury. There’s no reason to mess with the proven recipe, so Gaelic Gold slot also provide players the opportunity to buy a bonus feature.

However, due to the UK Gambling Commission’s regulations, it’s not available to UK players.