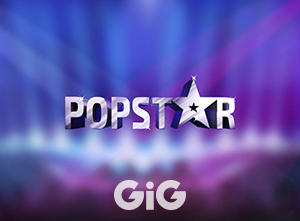 Continuing with their streak of launching exciting and interesting slot titles, GiG Games has followed up its previous releases with a fun new game called POPSTAR. In POPSTAR, players get to help an aspiring artist achieve stardom while scoring big paydays.

When asked about POPSTAR, GiG Games' head of product Kevin Corti commented that the company believes "a critical success factor for any video slot is that both gameplay and game theme are perfectly aligned." This belief plays out in the game where both the players and the aspiring pop star are hoping to achieve their dreams.

This title features a five-reel, four-row layout with 1,024 ways to win, and it has the look and feel of a high-energy television talent show. The background shows a big stage and the row of judges, and the visuals are dynamic, neon and attention-grabbing.

GiG Games collaborated with the Swedish music artist Erik Segerstedt during the creation of this title, and all of the special effects and music in the game are produced by him. Segerstedt also got his start on a reality TV talent show, and he will soon be releasing a full-length album. Two of his songs are featured in POPSTAR, and the overall soundtrack for the game is top-quality.

In addition to the exciting graphics and immersive soundtrack, there are free spins and wild substitution bonus features as well. When players land three or more golden microphones on a pay line, the free spin mode is activated.

Once triggered, players get a set number of free spins based on how many microphone symbols appeared on the reels. During the free spins, additional spins can be collected by landing two or more golden microphones on a pay line.

The neon wild symbol can be substituted for any of the symbols on the reels except for the golden microphone, which means that players get even more opportunities to win big.

The remaining high-paying symbols are Erik, the hopeful contestant, and the four judges: Tony Tantrum, Spicy B, Fortuna and B Reel.

GiG Games is a subsidiary of the Gaming Innovation Group Inc., which has provided an array of products and services to the entire online gaming industry since 2012. GiG Games has a reputation for releasing innovative and successful video slot titles with unique and interesting themes, quality graphics and excellent RTP.