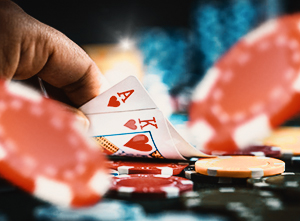 Like most forms of poker, to be a consistent winner at limit texas holdem poker, you need to enter the pot with a better hand than your opponents, on average, and understand the probabilities involved with having the best hand at any one time and improving to the best hand.

Following closely in importance, is a solid understanding of position and maximizing your winning hands while minimizing your losses. In this first of four limit holdem sections we are going to look at position and starting hand suggestions.

The button position is a large advantage because you will have the maximum amount of information before you must act and you may limp in (enter the pot by calling the bet instead of raising) with little chance of being raised by the blinds. This position will also allow you to see another card for free many times when you have a drawing hand.

The second best position is one spot to the right of the button and continues around to the player to the left of the big blind, often called under-the-gun.

Here are some suggestions for starting hands in each position. These are very tight and designed for beginning players. By following these guidelines you will not be entering many pots, but when you do you will have a strong hand.

As you gain experience you will be able to expand these selections based on the other players in the game and your own abilities. Of course if a hand is listed for early position, it is also included in the later positions.

I have not duplicated the entries to make it easier to read. A small “s” signifies cards that are suited, i.e.: AKs is an Ace and King of Hearts or Spades, etc.

All of the above recommendations assume no one has raised before you enter the pot. You will enter the pot with a raise with some of these hands. If there has been a raise before it's your turn to act, you need to enter the pot with only the best hands like large pairs and Aces with big kickers.

Continuing the discussion about starting hands in limit texas holdem poker found in part one of this series, in part two we are discussing pre-flop strategies. There are three interrelated areas, what hands to raise with, what hands to call a raise with and controlling the number of players in the pot, that must be considered.

As you gain experience as a limit holdem poker player, you will start using your pre-flop betting to control, to some degree, the number of opponents in the pot with you. This is very important as some starting hands work better against one opponent while others work better against many.

The most prominent example of this is AK, whether suited or not. AK plays best against one or two opponents. Your desire is to hit either an Ace or King on the flop to have top pair/top kicker and get paid off by an opponent with a worse kicker. For this reason, it is important to raise before the flop to hopefully thin the field.

If you are playing AK against three or four other players, it is likely that the flop will hit at least one of them. The worst that happens is you hit your Ace but someone else with an Ace also hits his or her kicker for two pair. In addition, AK will win some pots without improving against one opponent. On the other hand, hands like JTs are drawing hands.

When you have a drawing hand, you want as many players in the pot as possible because you won't hit your hand very often, but when you do you want to be paid off well. You want to limp in with drawing hands to encourage others to enter the pot. This also increases your pot odds after the flop to often make it correct to call a bet to see the turn on a good draw.

Another reason to consider raising pre-flop is to steal the button. If you are in late or middle position and think a raise may get everyone to fold between you and the blinds, you should almost always raise. This effectively gives you the button and an advantage on later rounds.

Here is a list of hands I recommend raising with pre-flop with a percentage in limit holdem poker, which designates what percentage of the time you should raise. Notice that nothing is 100% or 0%. This is because it is important to vary your play to keep your opponents guessing.

Use your own judgment with the above list. So much of correct play at the poker table is recognizing situations and taking advantage of them. If you find yourself in a game with only two players taking most flops, you may be more inclined to limp in with KK or QQ to try inducing a raise behind you. Almost every decision will be based on the current situation.

The last discussion is about what hands to call a raise with or re-raise. If the player who raised has been raising many pots with less than superior cards, you should probably follow normal starting hand requirements.

However, if the raise is from a holdem poker player who hasn't played a pot for an hour, only call with your very best hands. I would even throw away hands as good as AJ in certain situations. The reason for this is, what are you going to do if there is an Ace on the flop and the pre-flop raiser bets into you.

If you have AJ then you must re-raise to try to figure out where you are in the hand, but a good player will just re-raise you, even with only a pair of Queens or something similar and you still won't know where you are. In addition, what if the pre-flop raiser has AQ or AK. You stand to lose a lot of money.

Now that you have an idea of what hands to enter the pot with, let's discuss how to get the most profit from your winning hands while minimizing your losses when you are beaten in limit holdem poker. This is a very general discussion using a few examples designed to help you see how your actions can have a direct influence on the size of the pot and your chances to win.

Example 1: You are in the small blind with A 4 and call a single raise to see the flop along with three other players.

The correct play is to also check after the turn card. Then at this time, when the pre-flop raiser bets, you check-raise and bet into him/her on the river. Remember that the bets double on the turn. The point is that it is often best to check and call to let others become involved with your strongest hands. You don't want to do this if your hand is vulnerable to being outdrawn.

Example 2: You are under-the-gun with KK, raise pre-flop and get two callers, one in late position and the big blind.

If an Ace scares you so bad that you would check after raising pre-flop, you should be either playing lower limits or another game, and more importantly, you must bet to try to get the late position player to fold, giving you position on the small blind for the turn and river.

If both players call, you can check the turn. If this were the case, I would still call a turn bet and a river bet against some players. Most of the time you will know that you are beat, and when you know you are you should fold, but many players will call a flop bet with middle or bottom pair in hopes of hitting their second pair on the turn.

I realize this may be painful, but think about the situation. You raised pre-flop, bet on the flop, were raised and then you re-raised showing tremendous strength. If a player can stand up to all of this strength by continuing to raise, this is a clear signal you should fold.

The only players capable of making a play this sophisticated on a bluff are the top professionals and if you are playing and holding your own against them, you have already advanced past the scope of this article.

Isolating an opponent is the act of manipulating the size of the pot, almost always by raising, to get heads-up with them. By raising at a particular time, you may be able to get everyone else to fold with the exception of one opponent.

This is usually accomplished by re-raising an opponent who has entered the pot before you with a raise. This will often force everyone else to fold and isolate the lone opponent. This creates three advantages for you.

The biggest advantage is that you have position, and the other two are that you are playing heads-up and have shown strength. If you are able to determine who your weaker opponents are, isolation is a good way to extract extra profit each time you play. This works especially well when playing against a maniac, who raises with inferior hands often.

One note of caution; if there are other solid players to act behind you, they may have the same idea against a maniac and you can get caught in the middle of a maniac and solid player. This can become very expensive and should be avoided with all hands except your best.

Many players have heard about pot odds, but the best players know how to use another type of odds, implied odds, in their favor. Implied odds are using pot odds as well as the amount of additional bets you will be able to collect when you hit your hand to determine the correct play. This is best explained by example.

You are in the big blind with 5 7 and get to see the flop for free with three other players.

There are 6 small bets in the pot and you have 8 outs, giving you better than 6 to 1 odds, so you call.

There are now 4½ big bets in the pot, which isn't laying you the correct odds to call.

However, because it will be hard for your opponent to put you on a straight draw, the times you are able to hit it on the river, you will be able to collect at least one more and often two or more big bets; especially if your opponent has made two pair or trips. In addition, the times you don't hit your hand you can simply fold to a bet.

Realize that if there are two flush cards on the board and you are drawing to the flush, it will be apparent to your opponent when you hit your hand and your implied odds are limited.