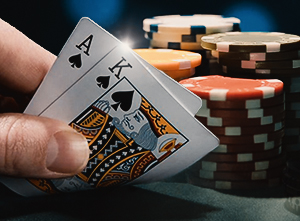 By far the most popular poker game today is Texas Holdem poker. Here is a short tutorial explaining how to play both limit and no-limit holdem poker.

Texas Holdem Poker is played with anywhere from 2 to 10 players. Most rooms will have either 9 or 10 person tables and some run 6 person tables as well. One person is designated as the dealer or button. The dealer has the advantage of acting last on each round of betting except the first. The button rotates to the left around the table one player at a time after each hand.

At times each player at the texas holdem poker table may be required to post an ante in addition to the blinds. This usually is the case in the later rounds of tournaments and is just another forced bet.

In no-limit, the raise can be any amount, as long as it is twice the previous bet, up to the total you have in front of you. Play continues to the left until everyone has either called all bets or folded.

The second round of betting starts at this time with the first person to the left of the button still in the hand. Each player may either check to the next player, place a bet, or call or raise if there has been a bet.

After this round of betting, a fourth card, called the Turn is placed in the center of the table, followed by another betting round. Remember that in this round and the last one the bets are twice the size of the first two rounds.

The final card, or River is placed in the center and the final round of betting takes place.

When all betting action is completed, the players use one or both of their hole cards with the community cards to form their best five-card hand. The player with the best hand is awarded the pot. In the case of two hands that tie for the best hand, each of them is awarded half of the pot.

Most rooms have a maximum of three raises per betting round. A few rooms waive this rule if the pot is down to two players. It is always a good idea to check the rules at the room you are playing in.