KENO: The "Game of the White Dove" 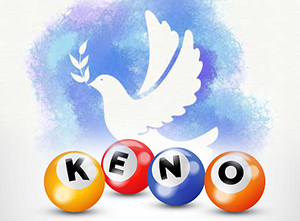 As Cheung Leung's game of chance became more and more popular, it was spread to other areas of China. This was to be anticipated, since it was, after all, a good formula, giving the citizens a voluntary method to contribute to the welfare of armies, as well as other civic concerns. But what was perhaps not foreseen was the logistical problem such an undertaking would present. You see, originally, drawings were held in the city, twice daily, with most of those who wished to partake being present. But when demand for the game moved to the outlying areas, in-person attendance, producing what we might recognize now as "instant winners," was not at all possible.

Yet people who played in this game wished to know the result nonetheless. Naturally with no media to speak of it would take a while for word to get to the smaller villages, far away from the central location of the drawing. How would the organizers of the game encourage repeat participation if the players couldn't find out in any kind of a timely manner whether they had won or lost? How would word of wins or losses get to the people who were actually supporting this game?

The answer came through a method one might consider to be one of the first successful ancient marketing techniques. The game's organizers would write the results on notes, then send those notes with "letter doves" or carrier pigeons, who would carry those results to whichever areas needed to see them. Because of this, the game became known as "The Game of the White Dove" or "The White Pigeon Game." Today, in the casino version of the game, there is no need to send a messenger; in some venues, one can see the keno results in almost every part of the gaming area, in addition to the coffee shop, where the player can participate too!