Keno And The Great Wall 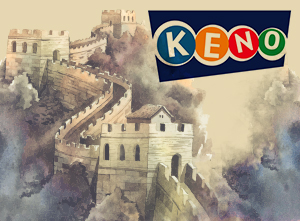 It has been passed down through history that the funds raised from keno games were largely responsible for providing financing for the construction of the Great Wall of China. Of course, the Great Wall had been started many years before that, in fact back in 208 B.C., during the Qin Dynasty. But the Han Dynasty (whose Cheung Leung is generally credited for being the inventor of the game) and other dynasties following it certainly built newer and renovated versions of it, encompassing the connectivity of various regional walls. Of course, it served a certain (although arguably minimal) defense function at the time, which in and of itself gave it a common thread with the original intention of Cheung Leung's game.

Obviously, history is not going to be completely accurate when establishing the association between keno and the Great Wall, but it would make sense that since millions and millions of Chinese were involved in the construction effort (indeed, one million Chinese were said to have died building the Great Wall), it was a massive organizational project, and had to be supported financially on a number of different levels. It is said that citizens were more or less forced into servitude in this effort, which would produce something of an irony if a "voluntary" method of financial support was used to fund something that required mandatory participation.

In the end, despite all the money that it cost to build, the Great Wall was of no use during the Ming Dynasty's fall in 1644. But keno lives on today, more popular than ever.