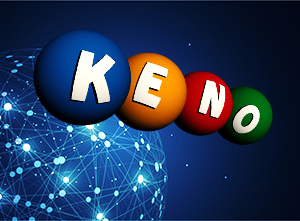 Some of the attraction of casino keno is that it can be played alone, or it can fit well into a dynamic of social interaction if that's the way you want it.

I'm not altogether sure my mother would like to play the game online.

On her semi-regular casino visits, she would sit and play in the casino's keno lounge with her friends. They relaxed amidst the atmosphere, played the games, compared notes, drank coffee (or whatever), had a good time, and let their money stretch itself out more than slots machines normally could.

It doesn't quite work that way when you're pulling the game up in a browser.

Online keno tends to take the social aspect out of the overall mix. In fact, one might think solitude to be a primary motivating factor for someone playing online keno.

Solitude may indeed be preferable in dealing with the pace of the online game, which is faster, for sure. The game is not characterized by a period of filling out the card, handing it in, and waiting in anticipation for the numbers to be drawn. In the internet-based keno game, you're going to find out almost immediately if you're a winner or not. In a way, it sheds the leisurely charm it enjoys when played in a physical location, but hey - it's perfect for those who cherish instant gratification.

My mom, on the other hand, would rather move at a snail's pace. And there's probably something else that wouldn't sit well with her; in some casinos, you can see the numbers being selected through the "blower," on closed-circuit television. For people like her, that offered an added confidence in the game, or at least the perception of such. As we play the game online, the numbers are also picked at random, but they're dictated by something called "algorithms."

And when you are as advanced in years as my mother, that kind of thing just sounds like a nasty medical term.