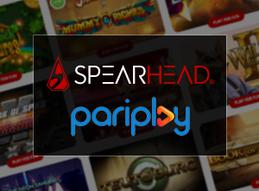 Spearhead Studios has announced its second distribution deal in a week with Pariplay. According to the deal, Spearhead will provide game aggregator and casino studio customers with access to its set of content in various European markets. Following in the footsteps of the Videoslots business alliance, partners of Pariplay, which has the Fusion aggregation platform and the Ignite Studio development program, the company will receive titles such as Book of the Princess, Book of Souls, Lara Jones is Cleopatra, Royal Crown and Fruits & 777's.

A Successful Year Behind; Bright Future Ahead

Spearhead, which recently celebrated its first anniversary, is approved to operate across 11 different countries such as Spain, Malta, Sweden, Romania, Latvia, Denmark, Lithuania, Estonia, Colombia. The company announced many new games to be released during this year such as Blue Diamond Book, Lara Jones - Cleopatra II, Jacks or Better and Wild Gold which will hit the market next month. In addition, the studio, which has already launched 28 slot machines and table games since they made their first steps into the competitive iGaming market, also plans to release several bingo games.

Mathias Larsson, Managing Director at Spearhead Studios, commented: “No doubt that Pariplay is one of the most influential companies within the gaming aggregation space, with many operators integrated over the years and also a powerful platform for content delivery. Spearhead Studios is thrilled to win over this agreement with them and we’re looking forward to seeing our games perform with their clients across Europe.”

Spearhead Studios is one of the newest casino providers of the gaming industry and the brand was developed by the popular casino operator, EveryMatrix. The company will expand the business into the broader field of online casino game development and the gaming studio is made up of a large team of talented, creative people and industry experts who previously worked for the Gaming Innovation Group, which was also developed by EveryMatrix. The company is headquartered in Spain. It is chaired by industry expert Mathias Larsson, who previously was part of Gaming Innovation Group as a Chief Executive Officer. He has over 10 years of experience in the iGaming industry, especially in the management area.