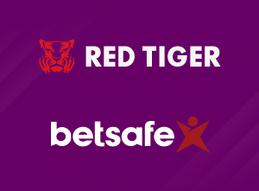 Online gaming specialist and NetEnt subsidiary, Red Tiger Gaming, has ambitious pretenses to conquer the European market. In its efforts to expand its influence in this region, the band signed a partnership agreement with the casino brand Betsafe.

Thanks to this deal, the provider has entered the regulated market of Estonia.

According to the details of the new partnership...

...the operator will access the developer's 20 top-performing games for a period of six months.

Alongside the selected titles from its portfolio, Red Tiger will also provide its award-winning Daily Drop Jackpots Network to Betsafe. Meaning the operator will have the opportunity to offer players exciting daily and hourly prizes.

As the company’s fastest-growing jackpot product...

...this jackpot network has paid out more than £2.5m in just four months since launch in April 2019. The network-wide ‘must-drop’ jackpots have been an unprecedented hit with tier one brands such as Betsson, GiG and Paddy Power Betfair, as well as millions of their players.

Since Daily Drop Jackpot Network is guaranteed to pay out a jackpot every single day, there's lays the root of its popularity. In July 2019, this system has paid out its biggest-ever daily prize with one UK Betsafe player - a scooping £61,500 from a £2 stake on classic hit slot Dragon's Luck.

...the highly popular jackpots product is available across all Red’s titles, giving everyone the chance to both win and promote some of the biggest prizes in the industry. Thanks to the new deal, Estonian players will have the opportunity to try it out via Betsafe platform.

The new partnership comes just days after the Red Gaming has released one of the most-anticipated game sequel - Gonzo's Quest Megaways. Not only that the sequel to one of the most popular games comes with megaways mechanics, it also incorporates the Daily Drop Jackpots.

Extension of the Partnership

Red Tiger and Betsafe have been partners for a while now. Their collaboration has demonstrated a great success across the Nordic countries and the UK. The recently signed deal is just an extension of the partnership between two brands to the new market - Estonia, where the operator is quite influential and popular amongst players.

Chris Looney, Commercial Director at Red, has expressed his delight about launching the brand's products into another territory with its partner:

“We have a great existing relationship with Betsafe and are delighted to be expanding into Estonia with them. It is a vibrant market that offers plenty of potential and we’re looking forward to seeing how players take to our games and jackpots.”

On the other side...

...Kaido Ulejev from Betsafe is equally satisfied with the extension of the partnership to the Estonian market:

“We are very familiar with Red Tiger’s products and have enjoyed a great relationship with its team in recent years. I’m sure Estonia will be a similar story and am excited to be launching their games for our players there,” said Ulejev.