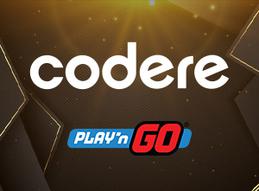 This new partnership means the developer’s catalog will go live with Codere’s many brands across multiple markets.

Most importantly, the deal means games like Prissy Princess, Planet Fortune, and Rise of Olympus will become available in key Latin American markets of Mexico and Columbia with a release in other territories happening later.

The Latin American markets have seen a lot of interest from developers and casino operators alike, with countries like Colombia having recently legalized or reformed their gambling laws to allow for more online casinos.

“We have a very ambitious growth plan, and it is vital to be able to count on high-performance, creative content such as that offered by Play'n GO. We see a content provider that has invested in being fully certified in each regulated market they enter into, and this facilitates a more fluid and joint expansion into new territories, as they open up.

This is not the first such partnership for the Spanish multinational operator as they have previously signed an agreement with the developer and live casino content producer Pragmatic Play which has helped them increase their game catalog in these very hot markets.

The CEO of Play’n GO, Johan Tornqvist, has also commented on the deal

“Codere is a very innovative company that seeks to grow in both mature and emerging markets, and Latin America is a priority for them. Their ambitions and vision match our own, making them a great partner to build a global relationship with. We are very excited to start this partnership and share our games with all the loyal players that the operator has in the region.”

The games that punters in Mexico and Columbia will now have access to include the recently released Mission Cash and Rise of Dead.

Mission Cash is a 60s spy movie-inspired game featuring extra spins and expanding wilds and Rise of Dead takes players on a journey into the depths of Egyptian pyramids to seek out riches and treasures.

The developer is sticking to a very busy release schedule which sees multiple games being released every month with recent releases including The Sword and the Grail, Hugo’s Adventure and Inferno Joker.

Codere Group is a leading Spanish multinational company, established 30 years ago, in the gaming sector in Europe and Latin America. They operate a large number of gaming machines, gaming halls, and similar venues across the markets they’re present in.

Play’n GO is a Sweden-based game developer established in 1997 to create online slots and other games for the then developing online igaming industry. Today, they are known as producers of high-quality titles which are innovative and mobile-friendly.