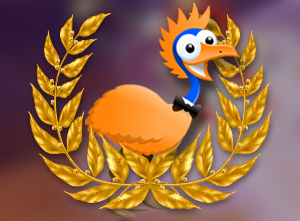 One lucky Aussie made out like a bandit with nearly $1 million from EmuCasino, an Australian online casino.

Chris from Victoria could have probably never guessed what kind of huge win awaited him when he made a relatively humble deposit of only a couple of hundreds. Spinning the reels on a Tuesday evening, he had no idea what Lady Luck had in store for him.

Chris was playing the 3 Witches slot game, betting about $200 per spin. The 26-year-old could have never predicted that this slot would pay out a $130,000 win.

Just as a refresher…

…3 Witches is an occult-themed online slot with five reels and three rows. It’s a 25 payline game, with the minimum bet set at $0.25

The lucky lad continued his winning streak by playing a live casino Roulette offering in which players bet from their computers while real dealers spin the wheel and stream it through the internet. This casino staple awarded him an extra $60,000.

But one slot and roulette weren’t the end. The true stroke of luck came from a game called, Wolf Treasure. This is 3x5, 25-bet way game set in the Wild West.

A cold dessert at night is filled with ferocious animals who make up the high paying symbols. In this mobile-friendly game, the wild sign is represented by a majestic wolf.

But players will want to keep their eyes peeled for the money symbol which is present in both normal play and extra spins. If six appear, a money respin feature will begin and if you get lucky enough you’ll win the MEGA JACKPOT.

This is exactly what happened to Chris. The casino did not disclose the exact value of the Mega Jackpot but we leave subtracting of $190,000 from a million as an exercise for the reader.

The Secret to Winning:

We can only wonder what Chris’ secret to lead him to achieve such a big win is; or maybe there is no secret after all, and the only way to win is to play. After all, he isn’t the first or the last player to win a jackpot.

A representative from the casino had this to say:

“Way to go, mate! And for the rest of you, may the odds be ever in your favor.”

EmuCasino is an Australian online gaming venue that offers a simple and user-friendly way to play casino games from the comfort of your home.

It offers 800 and more games to choose from, from slots to blackjack and other table games. There is a mobile version of the casino as well offering a reduced 180 games.

It was launched in 2012 and then relaunched with a snazzy and more feature-filled new site in 2015.