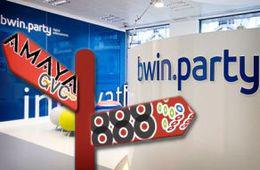 The bidding war for Bwin.Party has been primarily held between two groups. On the one hand, you have 888 Holdings, and on the other hand, you've had a cooperative effort between GVC and the Amaya Gaming Group. The GVC-Amaya cooperation was thought to have lost the bidding battle to 888 Holdings after an earlier announcement, but it seems like GVC just won't quit. They've announced a new offer to Bwin.Party that includes a collaboration with New York hedge fund Cerberus Capital Management and that does not include Amaya.

Is Amaya Out of the Deal?

It's unclear at this point if Amaya is out of the deal or not. They've said that they can't comment on what's happening, but that they have a role along with Cerberus and GVC that will be announced soon enough. This was looking to be like one of the two largest deals that Amaya has been involved in, along with their purchase of the Rational Group last year. They've shown that they can really improve the earnings of online gambling companies, and it would be interesting to see what they can do with Bwin.Party.

How Will the Deal Be Financed?

In terms of how they plan to finance this deal if it goes through, there would be new GVC shares given to shareholders of Bwin.Party. On top of that, €400 million would be provided by Cerberus Capital Management. They also want to raise £150 million through GVC shares to help with the costs of restructuring their company if they were to acquire Bwin.Party, and this also includes refinancing debt that Bwin.Party already has.

This bidding war has been one of the most interesting things to happen on the business side of the online gambling world in quite a while. It's hard to say which side is going to win because just when you think it's over, the other side comes back with an even bigger offer. One thing is definitely for sure at this point, however, and that's that both sides believe Bwin.Party could be much more profitable than it is right now. That's interesting considering how big of a company they are to begin with.