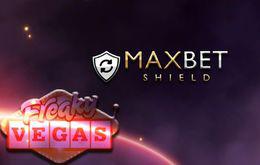 One of the things that is a problem for a lot of players is trying not to break the terms and conditions for bonuses. There is a ton of white print that comes along with any bonus promotion, and that's because the sites have to protect themselves from people who would abuse the deals without actually intending on playing the games. It's unfortunate that this is the case, but now FreakyVegas has come out with a feature to help players stay on the right side of these terms. It's called Max Bet Shield, and it could be the first in a series of player-assisting features when it comes to bonus terms and conditions.

What is Max Bet Shield?

Many online casinos have limits on the maximum bet size that you can make whenever you have a bonus active and are working on the wagering requirements. For FreakyVegas, that maximum is $5 per spin, which is within the range of what's normal for this sort of thing in the industry. Whenever you go to make a wager that is higher than this maximum now, however, a warning window will pop up to let you know that you're about to violate the terms and conditions for your bonus. It's a simply warning system that they are betting will do a lot of good.

Difficulties With the Fine Print

Players from all over the world have had issues with breaking terms and conditions for bonuses without having even realized it, and a part of that is how complicated that fine print can be. If you know what to look for, then it can still be easy to accidentally break those terms without meaning to. This can cost players a lot of value, so we're very happy to see FreakyVegas doing something to help players out in this regard.

FreakyVegas is an online casino that focuses on the European and Scandinavian markets. They have only been around since the third quarter of 2016, but in that time, they have built up a very sizable game offering with titles from Yggdrasil, Net Entertainment and other providers.