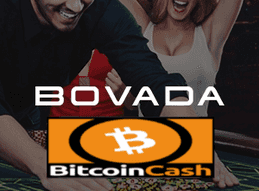 In the war over control of the hearts and minds of cryptocurrency users, Bovada Casino has positioned itself firmly in support of Bitcoin Cash (BCH) by offering the blockchain based currency as a banking option for depositing customers. The Bitcoin variant is seen as having lower transaction fees and faster processing times than Bitcoin (BTC).

BCH was created in a hard fork of the Bitcoin currency that occurred on August 1, 2017. The new currency offers a larger block size, which enables the speedier transactions.

The currency is no less volatile than the "original" BTC and is heavily backed by Chinese investors and miners. However, either option is good for online casino players who rarely leave large balances in gaming site accounts anyway.

Easy To Use Cryptocurrencies

All casinos and betting sites that accept cryptocurrencies, including Bovada, offer comprehensive tutorials with step-by-step instructions on how to transact in the alternate currency.

Using BTC, as found at Coinbase and other secure online platforms can incur as much as a 20% load by the time the currency is purchased with a credit card and transferred to a casino account. BCH is just as safe for consumers, but cannot be transferred or exchanged using the major processors, who many see as trying to change the altcoin world into one of a few central processors, rather than using coins as a storehouse of value, much like gold is.

While BCH took on a lot of value recently as BTC plummeted on news of one camp abandoning plans for a compromise solution, the values have returned to their previous trajectories with BCH currently down slightly since its peak on Nov.11 at about $1,300 and BTC back up to $6,530 having lost about 11% over the week but recovering from a low of $5,672 late on Saturday as Bitcoin Cash spiked.

Bovada Casino was created in 2011 when the Morris Mohawk Gaming Group lost its license with the Bodog brand, created by Bitcoin entrepreneur Calvin Ayre. US players are welcome there and they offer casino games from Rival, Makitone, and their own "stuck in time" versions of some Realtime Gaming titles. Similar online venues include Ignition casino, Slots.lv, and Cafe Casino.