32Red Purchased by the Kindred Group 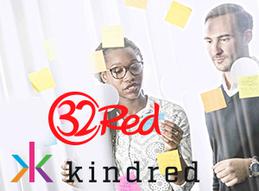 The online casino industry has all kinds of big business deals going on constantly in terms of one company buying another or merging together to form a larger overall body that can produce experiences for players. The Kindred Group has recently purchased 32Red, a major brand, and the United Kingdom Gambling Commission has approved everything. As of June 6, 2017, Kindred completely owns 32Red.

Previously, they owned 97 percent of stock in the company after the major deals were complete, and they purchased the final 3 percent as well. This will end with 32Red being removed from the London Stock Exchange (under the AIM Market). This is standard procedure once all of the stock in a particular company is purchased since its market value becomes irrelevant because it will not be bought and sold on the market any longer. From here, we'll get to see how this brand does under the Kindred label.

The Cost of the Deal

The total cost of this acquisition is around 4.6 million pounds upfront with between seven and eight million pounds coming each year for the following three years. This comes to a total of somewhere in the range of 25 to 30 million pounds, which is a pretty hefty sum for the purchase of a single brand like this. It shows that Kindred really thinks 32Red is worth it, and it's hard to argue against that considering how much attention and how loyal of a player base the latter has.

About the Kindred Group

The Kindred Group is known for having a high level of compliance with different regulatory bodies, often in excess of what's actually required. They win big awards each year for things like Operator of the Year and Social Responsible Operator of the Year for these types of efforts, and they have the eCOGRA Safe & Fair Seal along these lines. They are founding members of both ESSA and EGBA, two important European groups for maintaining the fairness and integrity of the games, and they are listed on Nasdaq Stockholm as they are one of the biggest providers for online gambling in Europe across more than a dozen brands.