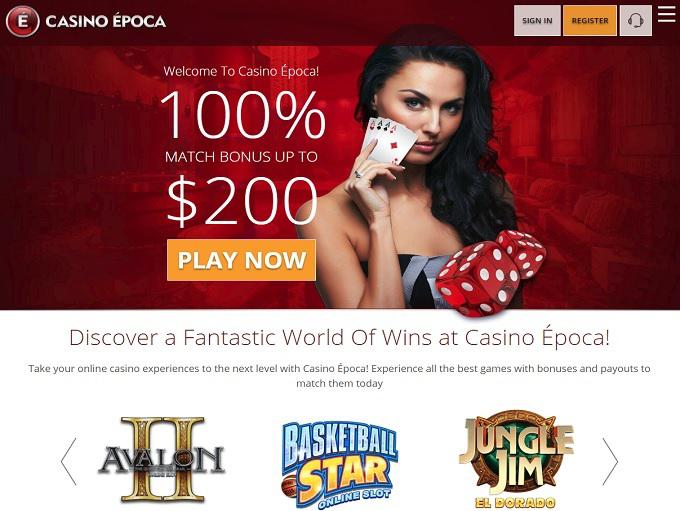 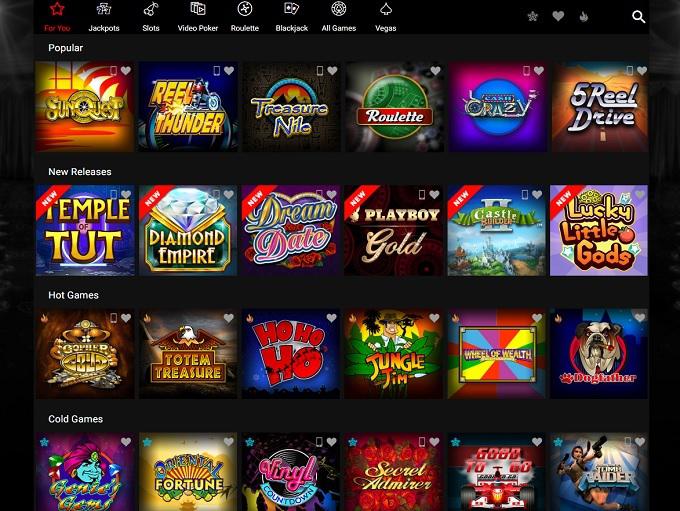 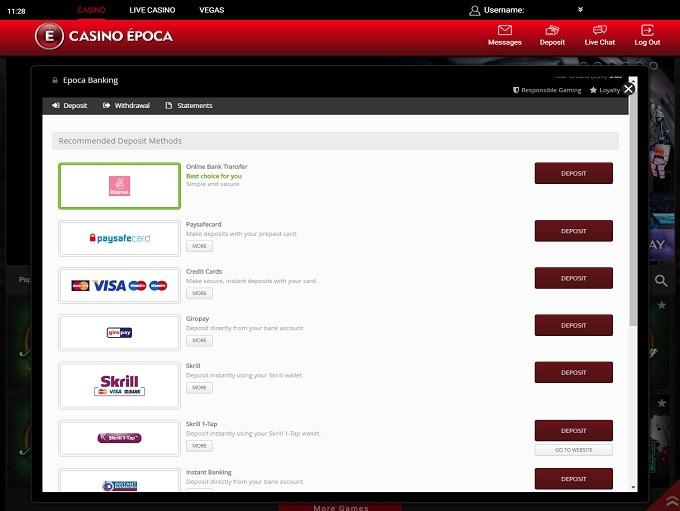 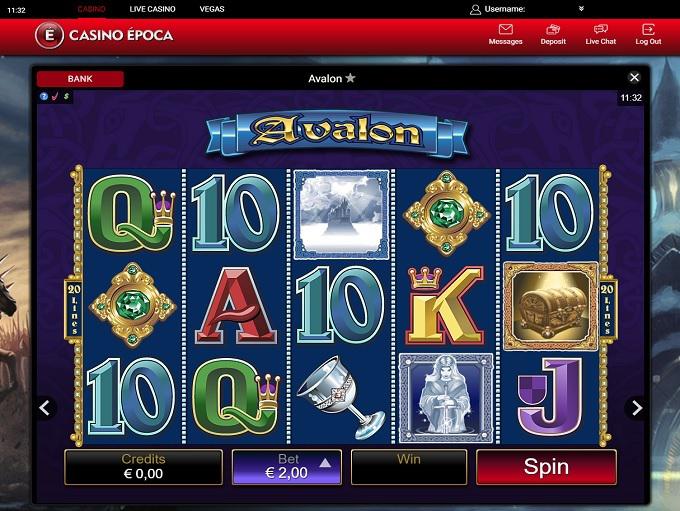 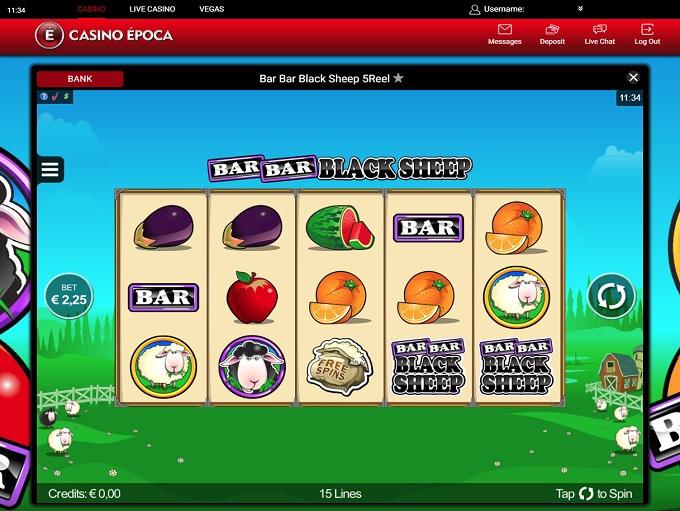 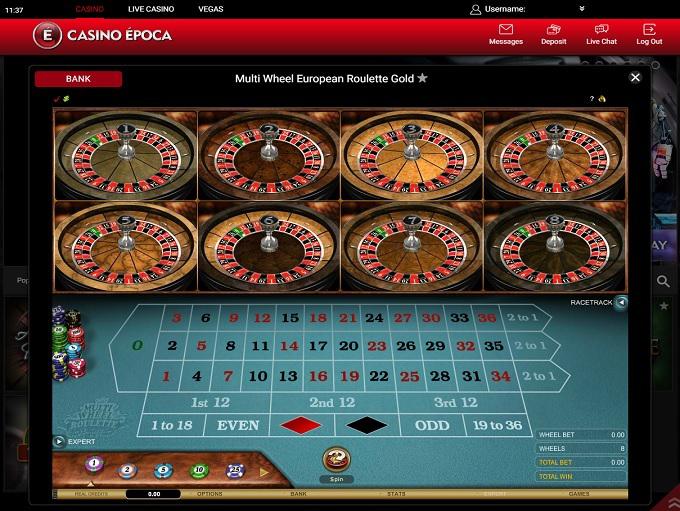 Casino Epoca roughly translates into "Casino Era," and they're a Spanish-focused online casino. However, they also offer both English and Portuguese, so they're really an international and inclusive operation. They've been running since 2010, and they're operated by the well-known Digimedia Ltd., a company with a good reputation for running solid sites. Epoca has its own reputation for good service and reliable payouts as well, and that reputation has been built up over more than half a decade of taking care of their players.

The software used at Casino Epoca is the Microgaming Quickfire platform. This platform includes a number of games produced by Microgaming, but it also includes a curated selection of titles from other providers. This provides the player with two key advantages. First, players get more frequent new releases since there are several companies putting them out, and this averages to anywhere from three to six new games each month. Second, it gives players a larger selection of titles from a variety of different styles.

Players have three main ways to get in on the action. The first is by a standard downloadable platform that installs on your computer. The second is by connecting through their Adobe Flash-based instant play site that runs in a web browser. Finally, you can connect through their mobile casino on your tablet, smartphone or other mobile device.

At this point, we need to bring up something that could be a bit of a concern for some players. Most online casinos that have a good reputation also have a very polished appearance. For some reason, at the time of this writing, the website and instant play software lobby for Casino Epoca looks very dated, to be polite about it. We're not really sure why they've chosen to neglect their website layout since we don't know of any other casino ran by Digimedia that does this. In spite of this awkward appearance, the operation itself does not seem to have suffered as best we can tell.

The game selection at this site focuses primarily on video slots with some classic slots and other games thrown in. With that having been said, it's important to realize that they do have a balanced selection of other titles with an impressive number of strategically-oriented games like video poker and blackjack thrown in. Most of the new titles are slots, however, and it'll be interesting to see how they adjust to this as they get more time under their belt and their game selection becomes more and more skewed towards one genre of games.

The slots at Casino Epoca are great, and there are a few hundred available. You'll get lots of franchise favorites like Avalon and Thunderstruck along with plenty of branded games like The Dark Knight, Jurassic Park, Game of Thrones and others. The non-Microgaming titles are very interesting as well because they are hand-selected from the best of what third party companies have to offer. In short, this helps to give them a really good mix of online slots that have different feels and different styles of play.

Over a dozen forms of video poker and several forms of blackjack can be found at this casino site. On top of that, you'll get a pretty in-depth collection of other traditional casino titles as well including multiple styles of blackjack, Baccarat and casino poker games. They do not have a live dealer casino, but their selection of non-slot games will give players plenty to choose from without feeling like there's much limiting their experience.

Several forms of payment are accepted at Casino Epoca, and this includes a number of credit cards and electronic wallet solutions. Visa, MasterCard, Click2Pay, EntroPay, EcoCard, ClickandBuy, InstaDebit, Neteller, Skrill and a number of other methods are available depending on where you're playing from. They have a fairly long record of reliably paying out when they are supposed to and not taking too long on cash outs.

Something that could be considered a minor weakness is that they have a maximum withdrawal limit on a weekly basis of €4,000, but that's only if you're cashing out at least five times the amount of your total deposits. It's very important to note that progressive jackpot wins are not included with this, and they have no problem playing out a lump sum if one of them is hit. Nobody likes withdrawal limits, but this one won't affect most net winners, so it's not that big of a deal.

Support at Casino Epoca has a good reputation and comes in multiple languages. They have country-specific phone numbers for Spain, Chile, Argentina, Mexico and Portugal, and the rest of the world has another line they can call as well. Live chat and email options are both available as well, and their support team is always available with anything you might need help with.