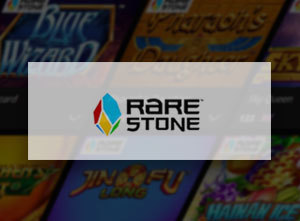 With such a name you have every right to expect something out of the ordinary and, fortunately, games made by this Sydney-based software provider do not fail to meet the players’ aspirations. Moreover, their slots embody the idea of an optimal balance between exciting gameplay and stimulating payouts.

The youngest member of the stronger than ever Playtech family, Rarestone Gaming brought in years of experience in making top-notch fruity machines for the demanding US market and crisp air of original solutions complemented by perfect math models.

Even though for a pretty overcrowded industry such as iGaming, rare can be a loaded word, it looks like in this case, it’s an accurate one. Perhaps, at the outset, people behind this Australian gaming brand didn’t really stand out taking into consideration pretty unpretentious Savage Jungle but soon it became clear that they specialize in those gems you’re less likely to encounter anywhere else.

Blazing The Way Into The Future

Long story short, we talk about their Fire Blaze series created with a great sense of excitement and anticipation to please even most avid punters.

Thanks to the happy blend of Playtech’s powerful back-end technologies and a unique set of extras that differ from one title to another, intriguing players and encouraging them to try every gripping release. In fact, the whole plot is based on the concept of four Jackpots – Mini, Minor, Major, and Grand – that can be won through the compelling Hold & Respin feature.

Perhaps, the most thrilling thing is ...

... that hefty Top Prizes can be hit multiple times within the feature, which means players have numerous chances to net out solid payouts.

All slots in this series are themed around wealth and prosperity of ancient civilizations – an incredibly popular topic among the gambling community that doesn’t cease to surprise with a diversity of approaches demonstrated by game makers from all around the globe. Besides superb visuals and engaging add-ons, Rarestone spinning adventures can brag of a solid RTP that generally goes over 96% and a truly extensive betting range able to suit cautious low-rollers and fascinate active whales who are usually not easily surprised.

For instance, 50-pay line Sky Queen and Pharaoh’s Daughter, the first two titles launched across the network, let you start playing at just €0.25 a spin and raise your stake up to more than impressive €500 per round. Providing that Grand Jackpot pays 2,000x total bet, one doesn’t need to be a math genius to figure out a whopping payout of €1,000,000!

Keeping pace with the beautiful ladies, all-mighty Blue Wizard offers the same remarkable range of stakes but across 30 lines. In terms of Bonanza, the scenario is similar: while Mini, Minor, and Major treats may be awarded during the Fire Blaze Respin Feature, to grab the Grand Jackpot, you have to cover with bonus symbols the entire 5x3 grid.

... apart from the huge winning potential of the Fire Blaze Jackpots, all these titles feature various win-boosting extras including wilds, multipliers, scatters, free spins. On the other hand, although not a part of the series, Tiger Stacks is still enhanced with Minor, Major, and Grand awards capable of turning any bad day into your thunder.