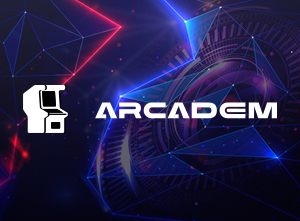 Founded in 2020 in Malta, this studio joined the rapidly growing iGaming industry to conquer the players with its futuristic perspective and innovative ideas. Aligned with one of the most renowned brands, and being fully compliant with some of the most stringent standards, the company already entered multiple jurisdictions.

What represents the very essence of Arcadem?

Having in mind that the studio was built by two close friends, their cooperation relies both on their friendship and mutual business aspirations.

…it is necessary to create optimal conditions for the entire team so that it could deliver the best. By respecting diversities and promoting a multicultural environment, this company gathers a versatility of views and opinions- and that’s precisely where they draw inspiration from.

Keep reading to find out more about Arcadem, its philosophy, and take a quick look at its portfolio!

Key Pillars of the Development Process

Each studio has its own approach, and some choose more, some less complicated road, but they all have the same goal- to deliver ultimate quality.

These are the phases of Arcadem’s creative process:

The entire team is passionately looking for new ideas, by exchanging visions with each other, all with the purpose to transform them into awesome and unique concepts.

Knowing that mathematics represents one important segment of content development, this enthusiastic gang pays special attention to this sector. By fusing design and functionality, they manage to deliver the finest experience.

Finally, the graphical dimension is the very medium through which game developers share their creative visions with their audience. For that reason, this producer puts plenty of effort to come up with as stunning visuals as possible. Like the provider says, the goal is to “create awesome games and even more awesome vibes.”

Backed up by years of wealthy experience in the industry…

…the people gathered in this creative workshop have gained their precious knowledge and expertise working on various positions. Being fully aware that developers need to be able to think from the perspective of players, the use that angle to deliver immersive, intriguing, and entertaining products.

What it takes is a high level of quality in all fields (artwork, sounds, theme, mechanics, etc.), and only then a content can deserve the status of a noteworthy. They know that all these ingredients are necessary so that players could enjoy playing slots- and they really do their best to transform those aspirations into reality.

On top of that…

…their titles are playable across any device or platform of players’ choice. Desktop, tablet, or mobile, never mind- gamers can immerse themselves in the unique experience delivered by these passionate creators both from home or on-the-go.

What up-and-coming producers do to gain wider visibility is join forces with bigger names, and this Malta-based developer is no exception to this.

…brought the strategic collaboration with EveryMatrix (EM), as the company announced them as its very first RGS Matrix Client. As far as agreed, the developer will gain exclusive opportunity to leverage this cutting-edge platform to make, deploy, and distribute its entire catalog of products.

Similar to EveryMatrix’s CasinoEngine, RGS Matrix is built on an open architecture and aims to be the platform of choice for independent producers seeking a reliable platform to develop, operate, and sell games.

Powering slots and table games, RGS is currently certified for Malta, Latvia, Lithuania, Estonia, Sweden, Spain, Denmark, and Colombia, with many jurisdictions to be conquered in the upcoming years.

It’s important to point out that…

…their games are fully available to all clients who currently take EM’s releases from Spearhead Studios. Associated with such well-established names, this rising star will instantly grab the attention of a wide spectrum of clientele.

At the time of our visit, the catalog contained only one product, but more than enough to draw some conclusions about what this brand has to offer and what’s the main idea.

“Nostalgic vibe with a futuristic twist”…

…is some sort of a definition the team came up with, describing its work. What they want is to bring an exhilarating ride through new worlds and adventures, all that with incredible and memorable characters.

Being in partnership with the music duo Ticon, the producer secures the finest soundtracks, all custom-made to fit their visions.

…like “The Fifth Element” or upcoming video games like “Cyberpunk 2077”, the studio proudly presented its first-born title “The Neon Samurai: Kawa”.

Releases with Japan-inspired elements are nothing new to the thriving universe of digital one-armed bandits, but when a studio manages to show it from some different angle, then it can be called a successful product.

So, what’s does this story of the last samurai bring?

Getting ready to embrace his destiny…

…he’s headed into the unknown which is portrayed as a neon world. Equipped with Wilds, Scatters, and multipliers, it contains the basic set of features which is usually seen in all slot games. Scary-sounding melody, accompanied by effective visuals and careful selection of colors do leave a strong impression on the players.

The next release to hit the shelves is “The Evil Elf: The Night Before Christmas” featuring a very mischievous character Frostberries, a wicked elf.

…its certainly more than enough to get the picture what can one expect from this forward-thinking provider- cool music, stunning visuals, and diversity of interesting topics. In short- everything it takes to appeal to the versatility of playing profiles.

Anything in the Pipeline?

As far as the team claims, their goal is not to deliver large amounts of games, but to focus on a carefully curated collection of products on a yearly basis.

The only hint they gave…

…is that they will be dealing with the diversity of themes, which will, without any doubt, bring a plethora of surprises. After all, when a developer is strongly determined to create great content and have fun doing it, then the only possible outcome is something awesome.

And that’s precisely what Arcadem is about.