Originally established as Tom Horn Enterprise and today known as Tom Horn Gaming, this company has been making steady inroads into the top of the online slot business since its inception in 2006. Since the start, the company has been exploring possibilities of doing things a bit differently, though this by no means suggests that they’d throw away all the lessons learned, or that they would ignore player favourites, whether that’s themes or special features.

Tom Horn isn’t the biggest game provider out there. Instead, they’d be best characterised as a mid-level producer that has managed to carve a hold for themselves in markets that are constantly changing. This by itself is no small feat and speaks volumes of the high-quality games the company has come up with. Let’s take a deeper look at what that means exactly.

Is It All About Graphics? 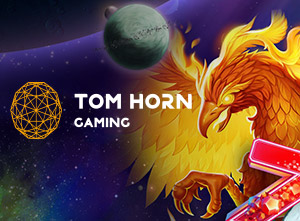 Amazing background graphics seamlessly mix in with the action of the reels, and the many custom symbols and forms that are present therein. It’s quite evident that a lot of work has gone into perfecting and designing the look, and that applies to the individual symbols as it does to the whole picture painted on the screen. And all that looks good on mobile devices just as it does on bigger screens. We could say similar words about the way sound effects and music play out, further reinforcing the theme and setting of each game.

To answer our question, no - that’s not all it is about. It’s great to have this level of graphics and details, but it’s more important to have gameplay that stands out, interests players, and most importantly gives them a chance of scoring big wins.

Special features that seek to expand…

…and increase the wins found in the basic paytable. That’s what you’re going to run into on most of these slots. Those base payouts might at times seem a bit low due to this, mostly in match with low variance online slots. But expanding wilds, multipliers, bonus spins, and plain old pick-a-win specials make sure that the main wins land somewhere between one and five thousand times your bet on most of these games. You’ll find the odd one out here and there that goes way above, or way below, giving you that extra bit of variance to enjoy from time to time. 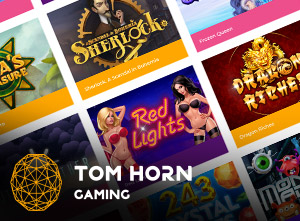 Red Lights with its somewhat unique and questionable theme, Dragon vs Phoenix with its irregular reel setup, Sky Barons with a simple way of scoring some aerial wins, Drunken Vikings with massive spoils, and 7 Mirrors with a very classic setup are all good choices when it comes to Tom Horn Gaming. All of these games apply different designs and themes, playing out differently despite mostly using the same reel and payline setups.

And this is just the starting point for you. Continue with 243 Crystals, take a spin in Hot Blizzard, or try your luck with Thrones of Persia. No one player is ever going to enjoy every slot they run across, no matter how favoured it is by other players, but you’re sure to find dozens of slots that are to your liking with this producer.