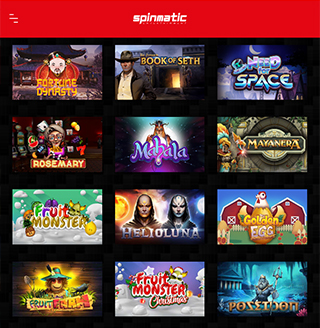 Spinmatic lists their operational start date as 2017, though the company seems to have been established in one form or another in 2015 already. The company holds offices in Malta, with partners and online casinos sporting their games throughout all the continents.

The quality of the games speaks for itself. Things that you will fall in love with are the graphics and animations, the modern mobile interface, and the countless special features. The themes are something to behold, whereas the return to player could sometimes be a little higher. Don’t worry though, these games tend to offer quite some pots to win. Check out what makes Spinmatic slots special below.

Casino ladies, adventurers and other characters

The themes that the Spinmatic slots come with tend to be character-driven. Half or so of their games come with fun and sometimes quirky characters playing their tricks on the reels, such as the old lady who’ll help you win with your spins by giving the slot machines a well-placed kick. Some of these individuals are connected to gambling, such as Batman, others are simply popular culture tropes such as the Indian Jones-lookalike.

Then there is the other half of their collection, which draws inspiration from a variety of general themes. The company is just comfortable using farmsteads as they are end-of-space scifi settings for their games. There are a few controversial titles in the mix, such as Plata o plomo, which is actually quite a nice slot for those who are familiar with the brand.

A theme alone, even when chosen with care, is not enough for success. It needs to be completed, and though gameplay features come into play here, the most important part is graphics and audio effects. This is what creates the feeling on the reels, and which is the source of most of the immersion the player feels.

Luckily, Spinmatic excels in doing just this. Their graphics come alive in a whole new way, both on traditional gaming devices, and on tablets and laptops. The excellence starts from symbols and quickly spreads through the whole game. Backgrounds often add details that others would omit. This is complemented by 3D graphics and animations in a single slot than you find in the entire repertoire of others.

Basic gameplay through reels and paylines

There are no significant changes when it comes to the basic qualities of slots. There is, however, plenty of variation. Some games use just the standard paylines, while others throw them away entirely and use ways to win systems. The reel setups change likewise. The usual five reels with three symbol a piece is a given, with plenty of minimal changes to accommodate more or fewer paylines. You can have three or four reels, or four, five or six symbols a piece. It all depends on the game you choose to play.

When it comes to special features you will find the wilds and scatters doing their usual bit(bonus spins are, of course, present). Gamble feature is present in some games, which goes to show that the company hasn’t thrown tradition out the window entirely. The only thing you won’t find(for now) are progressive jackpots. More modern features include multipliers, instant wins, bonus prizes, expanding symbols and a lot more. Take a look or choose a casino to spin in, you won’t be disappointed by Spinmatic slots!