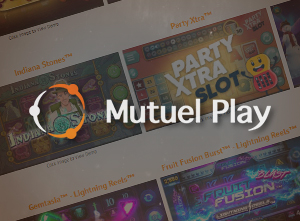 Development for all platforms and an aim to compete in the mobile casino markets was clearly on the cards since the day Mutuel Play was established in 2016. Besides producing games for themselves and their own brand, they also offer consulting services for online casinos and casino software providers. However, it’s clear that online slots are their main area of interest.

The company is very clear about its mission, goals and ways to achieve them, about how slots should work and what other companies are doing wrong. They’re not alone in this approach, and ultimately it’s up to the players to decide if what Mutuel Play offers is better than what other gaming companies have come up with. That said, you definitely want to take a look, as that alone is already enough to tell that they’re definitely onto something here. Let’s look at the details a bit more closely.

Reel Match is probably the best slot to start with if you want to find out what the company can do when it comes to music and other sound effects. Not that those would be any worse off at the other titles. Chocolicious really shows what the company can do with sweet details, and The Singer is a surprisingly detailed take on classic slots. One of the reasons the slot catalogue is quite small is probably because these games and others are of so high quality.

It’s not just the style and detail that stands out. The themes themselves are pretty noteworthy too. Singers, deli foods and treats, gems, snowfalls, and fantasy fights. And of course, there’s a handful that use a bit more familiar sources of inspiration, such as Field O’ Clover or Indiana Stones. Design and development with these online slots goes quite far, even before mathematics becomes involved.

How the Spins Play 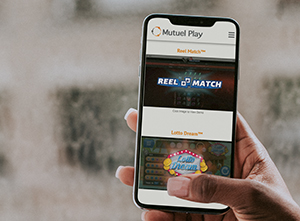 If you have ever played any slots at all you are probably familiar with the way they are set up. Five reels with symbols on each, and paylines that move from left to right. The aim is to obviously place the symbols on those paylines in the right order by spinning the reels. That’s pretty much what the standard of gameplay is here. That’s all fine, why reinvent the wheel when this is what most players want.

However, special features are where companies can shine a bit more. These games often come with the normal selection in this area too, with wilds and scatters accompanied by bonus spins. Luckily, they are often accompanied by extra features that can fire up the reels into an explosion of continuous wins. Replicating reels, extra wilds, more win multipliers, and other modifiers build up like a crescendo. It’s not the wildest selection of bonus games, but what it does it does well.

Spin Along is a feature Mutuel Play has developed all by itself, and it's quite an interesting concept. And perhaps just a little bit controversial too. Online gambling combined with social gaming has always been a bit of an open question, especially for social networks who often don’t know whether to allow the content or not. Which is why you rarely see anyone explore the possibilities.

This concept from the company might just change that. The idea is rather simple: follow your favourite streamers and play the same games as they do, spinning along. You won’t be getting the same exact results, at least not at the moment. Who knows how this concept will advance in the future as the company explores this uncharted territory. It might not sound much, but it could likewise be counted as the start of something entirely new. Keep an eye out for this.

Mutuel Play has managed to come up with a couple of excellent examples of how online slots can be combined with other casino games. They have several titles, such as Bingo Millions - Lucky Slot, that combine video bingo gaming with reels. These games don’t necessarily play out like either of the individual types, which just makes it all the more interesting to check out. Number games seems to be the main area of interest for the company at the moment, and so it should be so for players too.