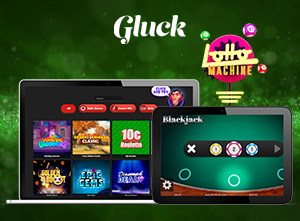 Gluck Games is a german gaming producer that originates from Berlin. They started operating in 2015, and in 2017 and 2018 they formed a partnership and a new company with Gamevy. Today they hold offices in several important iGaming jurisdictions.

The company has taken quite a modern approach into making slots, trusting in the skills, experience and determination of small teams. This has resulted in truly unique games that combine mobile gaming with what is essentially modern culture. Slots are not their main line of products, with a host of instant win solutions and lottery games forming the majority of their portfolio.

How to make games for Millenials

How about some unicorns? Or games with a modern mobile interface? Or just simple fun combined with superb humor? Don’t forget the special features and massive wins either. These are things that combine to form the backbone of Gluck Games slots (well, the unicorns are in just one slot).

These games do not follow any one standard setup. Instead, they try a lot of new things with each and every title, including keeping things standard and simple from time to time. Heavy emphasis on graphics and audio effects further polishes the slots. There are a few classics in the mix, but the majority of these games are aimed at those of us who are used to gaming on the internet as opposed to traditional gaming terminals.

Instant win titles for everyone

The big surprise is that what Gluck is really known from are their countless instant win titles. These games come in all forms: lotteries, scratch cards, bingo, keno and all sorts of one-of-a-kind instant wins. If that’s what you are after then this company will surprise you with the variety and size of their catalogue. In fact, one could say that they have the biggest number of such games available right now.

As we already mentioned, the company excels in variety when it comes to bonus games and subject matter. If you are tired of Greek gods, classic games, or other themes that have already been done a hundred times, then jump right in and pick one of these games. We can’t stress enough how unique the concept material is, and how well it is all executed through detailed graphics, animations and sound effects.

When it comes to features the company goes one of two ways: specials that pay out big time, such as jackpots and bonus spins, or no features at all. The latter might sound like a bit of a disappointment, but it truth it means that these slots tend to pack a pretty heavy punch through the basic payout table. Who needs specials when a single five symbol combo can land you thousands of coins in a single spin?