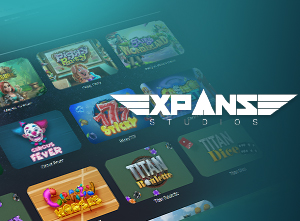 Becoming part of the busy iGaming industry in 2019, this enthusiastic provider brings a wealth of new energy and rich experience. Putting consumers’ needs in the first place, the team wants to deliver excellence by offering superior design, user-friendly gameplay, and inventive features.

This forward-thinking approach brought them a strategic agreement with one of the most widely-spread operators, Meridianbet, adding more value and diversity to the operator’s impressive library.

Does Expanse Studios have interesting games?

A single glance at the colorful visuals and variety of topics is already enough to grab one’s attention and invite spectators to explore. Just like we did.

Stay with us to hear more about releases from Expanse Studios.

What Differs Their Slots from Competitors’?

At first sight, the selection of topics found in their slot games may seem ordinary, something that all studios have in their portfolios. There are animals, circus, treasure, and of course, fruits is one of the first commons symbols in one-armed bandits.

There’s 777 Sticky with old-school symbols, Maya’s Treasure and all the untold riches inside it, Casino Heist which captures the bricks-and-mortar gaming experience, and more- but all seen so many times.

But when scratching the surface a bit…

…one reveals the whole new energy each of the games has. Special attention is put on the “machinery” of the game, making sure it is compatible with the story.

That’s precisely the element that indicates that the entire team is united in the brainstorming process, analyzing carefully which elements will match each other perfectly.

Reimagining some classic formats, their gaming library is also home to some unusual and inventive variants of common casino games. Hi-Lo, Diamond Blackjack, Titan Roulette, Titan Dice, and Pixel Poker- even the names imply these come with “something old and something new”.

…and brings an adventurous mission where punters are prompted to find hidden symbols and upgrade levels. Those who cannot make up their mind between slots and scratch cards could find Gem Miner interesting, as it brings the best from both genres.

While exploring the catalog, we encountered the commonly seen features such as Wilds, Scatters, multipliers, and extra spins. But what kind of innovators would they be if they’ve decided to stay within the limits of expected?

One of the games…

…Maya’s Treasure comes with tumbling reels, which have the power to award multiple consecutive winnings. And that happens not just in the base game, but in the complimentary session as well. This one also comes with Torrent multiplier, where the win booster increases with each consecutive fall.

Aside from these, there are also sticky wilds, special symbols which initiate re-spins, mystery and wheel bonuses, gamble feature, all of which perfectly complement the gameplay and the atmosphere.

Plus, the games have superb visuals, perfectly designed and vibrantly painted characters, as well as excellent audio. These elements altogether confirm that Expanse Studios knows what players want, and what’s even more important- knows how to deliver it.