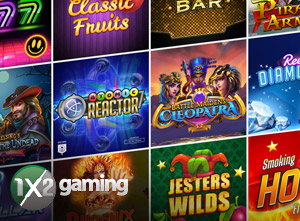 1X2gaming is a UK casino gaming brand. They operate from Brighton and have done so since the company was established in 2002. Today they offer all sorts of casino games throughout the world, with online slots forming the biggest single group of games. Arcade games, instant win titles, virtual sports and table games can also be found in sufficient enough numbers to offer something interesting to try out.

In many ways, this company sticks to traditional gaming, though as of late they have started experimenting with a more modern style of online gaming. Despite some of the games adhering to what can be considered a classic look, you can be certain that they come with multi-device support, making them playable on all smartphones, tablets and other computer devices. The company is quite well connected, and its products can be found in most major online casinos.

You shouldn’t be surprised to find a title like Classic Fruits in this selection of online slots, nor something like Neon Fruits that uses the same basic set of symbols, but adds a bit more modern touch of colour to it all. Field of Clover, Super Rainbow Megaways, Pots of Luck and other such titles can be considered quite classic displays of luck and riches too.

Asgard Warriors, Book of Merlin, Era of Gods, Aztec Secrets and other similar names point to a great interest in historical and mythological themes. However, it’s not all about such popular settings. For example, Dead World brings you in the middle of a rather surreal slasher setting. Blood Bank gives you a somewhat comical impression of Dracula, and Kitty Cash brings some cartoonish animals on the reels. There’s a pretty good mix of all sorts of themes at play.

But it’s not just about graphics and themes…

…is it? There are things beyond these basics that really determine how the games play out, and what you as a player get out of them. So what is that you actually get to witness at the reels of 1X2gaming online slots? Let’s take a look if there’s enough diversity in action to keep things interesting.

Online slots today are basically divided into two parts: the basic paytable and the special features that enhance those wins or bring in a completely new selection of prizes. The paytables themselves offer a mix of possibilities. Some slots offer low, others medium and most high variance. The different wins tend to go hand in hand with these. Most of the titles use simple paylines in different numbers, whilst some of the newer online slots have gone all the way to Megaways.

The special features, also known as bonus features, mostly come in the form of bonus spins. Wilds and scatters are understandably also present in pretty much all of these games. Bonus games with pick and win mechanics is another popular feature found in a variety of different slots. Some slots expand on both of these options with different modifiers.

Perhaps that’s the Achilles’ heel when it comes to 1X2gaming casino games. There just isn’t much going around in the way of specials and bonuses. On that note, bonus spins and other promotions aren’t usually that plentiful either, though bonus cash is naturally usable on most of these games.

RTP and Other Things

A couple of games dip below 96%, and likewise, a handful of games go above 97% when it comes to the return to player figures. We consider these quite good figures, definitely in line with the best paying online slots there are. When it comes to wins you will often run into limited wins. Some titles have the maximum win capped to 10 000€ or equivalent, whilst others go way above this. Usually, this correlates with the variance of the game, and it’s not something most players will ever be facing.

The upside of such limits is that these are perfect slots for when you’re looking to play with lower bets. That’s something that the overall design of these online slots tends to reinforce further. Just add in some bonus spins and 1X2gaming slots are sure to surge to new levels of popularity.

Other Casino Games From

Virtual sports is something the company started with. Even though they have moved on to other games, you can still find a few of these specialities in the mix. Just set your bet and look out for the animated outcome. Arcade games are even rarer, and not just with this producer. Though you can still win substantial sums, the gameplay is completely different from what we’ve gotten used to. Or how does throwing darts sound like a casino game? A handful of table games rounds out the selection nicely.

If the lack of specialised bonus features isn’t a detriment for you, then 1X2gaming casino games are definitely something worth checking out.