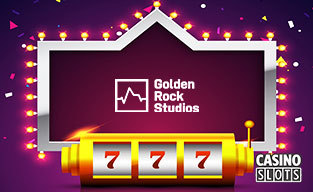 Golden Rock Studios is part of the Microgaming family, which means that they are a small independent studio with an exclusive deal. The company started operating in 2018, but thanks to the fact that the staff is full of gaming enthusiasts and experienced industry experts they are capable of producing cutting edge games.

The company operates from the UK and Gibraltar. They produce slots as well as table games, with emphasis on the former. Their games seek to surprise the player via a combination of qualities, such as innovative features, surprising mathematics, and excellent artwork. So far they’ve done a pretty good job of this.

How to innovate with slots

There are so many slots in the markets today that it’s hard to fit in. Even if you are in partnership with a company as big as Microgaming. Amongst thousands, how do you stand out?

Well, one thing is to have a talented and experienced crew, which the company seems to have from top to bottom. But this doesn’t count for much if there’s not a clear strategy for the slots in making.

The company has put a lot of effort into graphics. This might explain why the release schedule isn’t the fastest one around. They certainly have a style of their own. They have also chosen to go for the high-end when it comes to volatility. The mathematic models support big wins through features and through the normal paytable. Then there are the special features too...

Fresh winds for table games too

The above doesn’t only apply to slot games. The company has been hard at work to bring something new into the world of table games too. Now, it’s a lot harder to innovate with games like blackjack and roulette, but at least Golden Rock is trying. Same can’t be said for most other companies. For now, these extra features make the games worth checking out for anyone who is into table games.

...what common features to expect in these games

Most of the slots (so far that is to say) come with a rather standard setup for reels. Five with three symbols each seems to be the way to go. This is combined with a normal number of paylines, which can pay from left to right, or both ways in some cases. Thus far, quite normal.

Which means that most of the big wins are to be had via special features. These can come in the form of extra spins, wilds, or special symbols. One of the features seem to be present from one slot to the next are multipliers in different forms. These can come as a bonus from successive wins, or simply as endless combos of wilds. Check out the games right here, or choose a casino to play in!