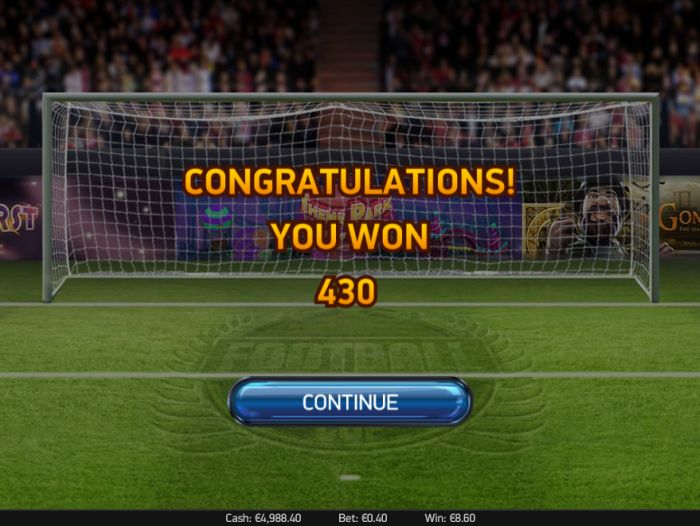 Online slots based around sports have been around for the entire two decades that the online casino industry has been around, but they have gotten more and more in-depth since their first appearances in the mid-1990s. The Champions Cup slot by Net Entertainment is a good example of that, and this new release has a lot to offer even if you don't follow football (soccer) because the gameplay is excellent in and of itself.

This five-reel, three-row, 20-payline video slot gives players plenty of betting options. You can spend between $0.20 and $100 on each individual spin, so it's obvious that this was designed with all different kinds of players at different stakes in mind. You'll hear the crowd cheer while you play like you would if you were in the middle of a real game, and there are tons of related equipment on the reels as well like gloves, shirts, balls, cleats, etc. They've really packed a lot of things into this game to give it a cohesive theme, and that's something that we believe players will really appreciate.

Players in this game will have a chance to gain access to two different bonus features in this online slot. The first is based on getting three or more of the ball symbol, and it gives you a chance to try to score a goal and get in on the action in the game. The second feature is based on free spins, and naturally enough, you gain access to that feature by getting three or more of the free spins feature. This is based around the idea of moving up through a tournament bracket, and the further you make it, the better rewards you get.

Back in January, we predicted that Net Entertainment was going to have an excellent year that was based largely around a ton of momentum coming from frequent releases. We've seen that in a major way with the Champions Cup slot, their NetEnt Rocks line of games and other new titles that have been added. We're curious to see what we get through the rest of the year because they've definitely been giving players a lot to be excited about.