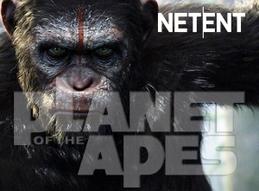 After announcing in February that they had sealed the deal on a license agreement with 20th Century Fox, NetEnt has finally revealed a launch date for their first Planet of the Apes slot machine. The first game, in what could be a long line of serial releases covering each new Planet of the Apes movie, will be released on October 23.

Simply titled, Planet of the Apes, seems to be designed first and foremost for mobile play as evidenced by the game's two side by side 5-reel sets; Rise and Dawn. Characters and the theme on the left side of the game come from the groundbreaking 2011 release, Rise of the Planet of the Apes, and those on the right draw on 2014's Dawn movie.

Where to Play Planet of the Apes

The game will be available Monday, October 23, 2017, at casinos carrying NetEnt games, including Mr Green, Guts, and Video Slots casinos.

The two 5-reel, 3-row, 20-lines (fixed) subsets feature free spins, bonus symbols, wilds, and stacked wild symbols, and individual bonus features. There is also a Dual feature. After any "big win", players are treated to clips from the movies filling the game screen. The longer it takes to add up the winning coins, the longer the movie snippet lasts. A troop of apes will occasionally run across the bottom of the viewing area during game play, reinforcing the game's sense of place.

When Rise free spins are awarded the game screen only shows the leftmost 5 reels and the opposite is true for the Dawn free spins feature. When both are won on the same paid spin, Rise games will complete before being replaced by Dawn free spins.

While the game is certainly optimized for mobile play, a full surround sound experience would make it even more exciting at home. Players on desktop devices, especially HD big screens should have the best experience unless they have opted for a Bluetooth solution such as Bose for their mobile gaming sound system.

A First for Iconic Franchise

Simon Hammon, Chief Product Officer of NetEnt, commented on inking the license deal earlier this year: “Planet of the Apes is one of the largest film franchises in the world never to have been applied to gaming before. With such a rich history, the brand resonates with everyone that has grown up with the films, and it will fit perfectly with NetEnt’s wide and diverse player base. We are thrilled to have signed the franchise, and can’t wait to offer the game to players later in the year.”

That time is almost upon us.