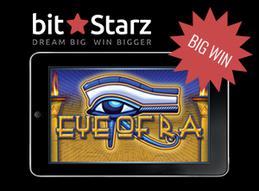 No slot player ever has ever said, "I hope I don't win a big jackpot today," and meant it. That's because the goal of every slots fan is to take down a huge prize that will be a large enough sum to change his or her life. BitStarz was home to a six-figure win along these lines earlier this month, and it came on the Eye of Ra slot.

The official total for this prize came in at $112,402. It happened on Amatic's Eye of Ra slot, and it's important in terms of records because it includes the third-highest payout to ever happen at BitStarz in a single spin. This winning streak ended in well over $100,000 being awarded to this lucky player, and that just goes to show that Amatic slots are hot right now, especially since a number of other big wins have happened on their games in the past several weeks.

The slots produced by Amatic have good graphics and great gameplay with chances to win some pretty impressive prizes. This is obviously a winning combination for players since they keep coming back for more and more, and it goes to show that quality is the name of the game in today's industry. It doesn't matter if you have more games available than the other guys if they're not of a higher quality, and that is why Amatic gets so much play despite having fewer games than a lot of the competition.

BitStarz is known for giving players chances to win big with software from several different providers, including Amatic. They have hundreds of high-quality slots, and they know how to make sure that players are able to get in on the action on the titles they want to play. It's a great example of a strong mix of high-end games that come in different styles and approaches, which makes it easy for find exactly what you're looking for.