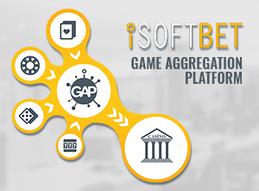 iSoftBet is known primarily for their high-end online slots and the fact that they have games at a ton of solid online casinos thanks to their distribution deal with the Microgaming Quickfire platform. However, they also have their own software called the GAP or Gaming Aggregation Platform, and they've added a tool to that platform that will allow for a high level of customizable experiences by operators.

'In-Game' is the name of this new tool that's based around giving players various types of gamification that can be added overtop their existing portfolio. This includes their own games and third-party titles hosted on their GAP software.

The basic idea here is that it gives operators easy access to add things like leaderboard competitions, in-game achievements, awards points, cash bonuses and other goodies to anyone using any of the more than 3,000 titles provided on the GAP software platform. This includes games from more than 50 partners overall that have contributed titles to the overall portfolio, and that's a very impressive amount.

The Current Role of Gamification

Partially due to influences from console and PC video games and partially due to influences from the mobile revolution that has happened over the past decade, gamification has a more important role than ever in virtually any type of gaming experience that you can have, and that includes playing online slots or anything else that an online casino site has to offer. iSoftBet is simply harnessing what players have already shown that they want and will be offering it through a unified platform for all of the games under their umbrella, which is a pretty smart and straightforward thing to do.

At ICE Totally Gaming, one of the largest conferences in the world for online gambling, iSoftBet announced a few new releases coming up. This list includes Pinata Fiesta, Merlin's Magic Mirror and Vegas High Roller. These three titles are expected to be some of their biggest releases of the year, so it's no surprise that players are as excited as they are to see how they turn out and to jump into the action as soon as they can to see just how good they are. If they're anything like what we expect, then they'll be excellent games.