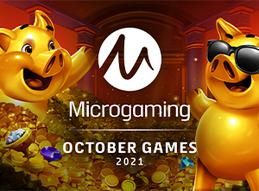 Microgaming has announced a lineup of games, which, in addition to a progressive safari-themed slot and branded jungle quest, features a premium selection of games from its expanding network of game development studios ready to go to conquer the market!

Kicking Off with Range of Exciting Slots

During the first half of the month, players can expect several exiting games. A relatively young casino studio, Snowboard Games, launched medieval-themed online slot, Legend of the Sword, which offers an RTP of 96.12%. Half Pixel Studio will take players on an underwater adventure with Atlantis The Forgotten Kingdom. This is high volatility title with an RTP of 96.19%. Booming Games will launch Rhino Hold and Win, while PearlFiction Studios will release five-jackpot Squealin Riches slot which has RTP of 96.02%. The next title will be Dragon’s Breath from Rabcat, this medium volatility game offers RTP of 96.06%.

In the second part of the month, on 19th October, the popular All41 Studios will launch WWE Legends Link & Win, a branded online slot which has an RTP of 96.40%. Later, another promising provider, Slingshot Studios, will release the Irish-themed Leprechaun Links. On 26th October, Alchemy Gaming will introduce players to Chronicles of Olympus X UP. This title promises a huge potential win of 50,000x the bet as well as an RTP of 96.33%.

Microgaming was established in 1994 and is one of the largest gaming software providers in the world. The brand is known in the world of online slots and for cutting-edge solutions in the iGaming market. Since casinos do not usually produce games themselves, it is very important to hire reputable gaming professionals. According to research, the best casino on the market today from the brand is Hippodrome. In fact, if players place bets at the brand’s casinos, a great gaming experience is guaranteed for them, because the online slots and table games provided by this provider are among the most popular!