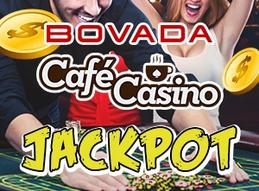 Bovada Casino saw a lucky player land a Royal Flush while playing Let ‘Em Ride table poker against the house recently. Doug P. from Georgia placed a $10 Ante and pitched in an extra dollar for the progressive jackpot side bet. All you need to win the game is a pair of tens and you don't have to beat a dealer or any other players, just the paytable and odds.

Doug saw his first three cards had the makings of the elusive Royal Flush, something that only occurs once in every 649,739 hands on average but his odds just got a lot better so he raised his bet $10. Luck was still on his side but now he was looking at either going bust, catching a Straight or Flush, or taking down the progressive jackpot with a Royal.

Being a thinking player he must have considered whether or not to raise again. After all, the jackpot was $91,859 either way and the standard paytable would have only doubled his 1000:1 payout on a second raised bet. Either way, he made the right choice with all the stars lined up in his favor and raised again. Low and behold the fifth suited card dropped in completing his straight for a Royal Flush.

The Let ‘Em Ride Progressive is back up to $18,000 already and has picked up about $5,000 overnight. Players can choose the classic version that looks and acts just like the RTG game or go for the new mobile-optimized version with a clean cool interface. No matter, they share the same rules, jackpot, and quick-easy betting format -  they just look a little different.

Achilles was one of Realtime Gaming's first "Aussie slots" and is still the go-to game for many players today. Rob J. from Pennsylvania was playing it recently on mobile at Café Casino and landed three scattered Achilles wild symbols triggering free spins. The game has two free spins bonuses, the other triggers whenever three or more Troy icons land. But when the Achilles feature is triggered all of the troy icons either become wild Achilles or the other highest paying symbol, Helen.

During Achilles free spins all payouts are tripled. On one lucky spin, Rob landed 4 Helens and an Achilles, which instead of paying 5,000x line bet paid 15,000x. The trigger or balance of spins must have been pretty stark with only $240 to show for them, but the total payout of $75,240 certainly made up for any blank spins. For low rollers, this is the same as winning $150.48 from a twenty cent spin or 752.4x total bet. It's no wonder Achilles is as popular today as it was over 10 years ago.