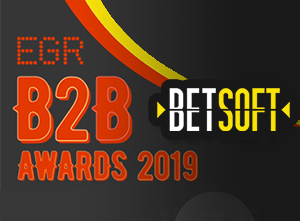 Leading casino content developer, Betsoft, has won the Innovation in RNG Casino Software at the EGR B2B Awards 2019, the gaming industry’s most prestigious event of the year.

The developer was awarded the prize for its output in the last 12 months, but the panel highlighted its ground-breaking release, Max Quest: Wrath of Ra, as a truly innovative product.

...were just some of the superlatives used to describe Max Quest: Wrath of Ra, an action-packed real money product that pits up to six players against a horde of ancient Egyptian horrors – from mummies to Anubis and beyond.

This is a game that does away with the standard symbols and paylines of yore, instead of blazing a new trail by replacing them all with hardcore multiplayer shoot-em-up action.

Instead of just spinning reels, players can take a much more active role by shooting down enemies and choosing which upgrades and weapons to buy from the real money shop.

It’s a slot for the e-sports age and convergence of social video gaming with online casinos .

“To say we’re thrilled would be a huge understatement. This is an amazing achievement for us and we are extremely happy to see that the industry has recognized the innovation that went into the development of Max Quest.

“The Betsoft team worked tirelessly for many months to develop and launch Max Quest and they have delivered a game-changing concept to a market that is seeking fresh propositions for its players. We have some of the most talented people here and this award is for them.”

This award is not the only one the supplier has won recently...

Anastasi, regarding this award, added: “The last year has been phenomenal for Betsoft with products such as Max Quest changing the way players interact with RNG games, alongside the launch of best performing additions to our portfolio of highly innovative, cinematic slots such as Spinfinity Man and Viking’s Voyage.”

“We’re delighted to have won this award and its testament to all the hard work our entire team puts in every day and the milestones they have achieved in recent months.”

Betsoft is a leading content developer, has partnered with several operators across the globe. It has more than 190 RNG products in its portfolio and is both based and licensed in Malta.