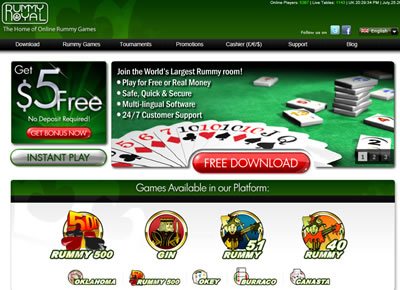 Rummy Royal is the first and only online Rummy site to offer multiplayer ring games and tournaments of up to four players at a time, and provides its members with the ultimate online Rummy experience!

Since Rummy usually involves 2 to 6 players, it's difficult to hone your skills by yourself. That's where Rummy Royal comes in.

Note: Rummy Royal no longer operates in the France, U.S. and Israel territories. French, U.S., and Israeli players no longer have access to "Real Mode".

At Rummy Royal you can play online rummy games for free against others players from around the world, or choose to put your money on the line if you think you have what it takes to win.

Rummy is probably one of the best-known draw and discard skill games, so it’s no surprise that online rummy has taken off in the past few years.

The object in the game of online rummy is to improve one’s hand by forming sets of matching cards such as groups of the same rank or sequences in a suit. Players draw one card from the deck or the discard pile then must discard the same card or one of their own. Although there is some luck involved, Rummy, for the most part, is a game of skill that takes time to master.

Rummy Royal offers a great promotional match bonus for new players. The bonus is credited to a players account in increments of $10 upon accumulating 20 bonus points (bonus point credited for each $1 fee paid by player per game played. A single ring game and a single tourney are each considered one game).

Players have 60 days to release their bonus money to their account. After 60 days any bonus money not claimed will become null and void. For returning players, Rummy Royal offers the “Royal Stars Club” loyalty program where players can win prizes and earn points toward other promotions. Prices and times may change over time, so see the Rummy Royal's terms and conditions for complete details.

The final score for the deal (including any undercut or gin bonus) is doubled if the original face up card is a spade. The target score for winning Oklahoma Gin is generally set at 150 rather than 100.

Players are able to deposit funds into their accounts via several deposit methods.
Rummy Royal online is owned and operated by RM Royal Media Ltd. based in Cyprus.

Come and play the game of royalty at Rummy Royal!