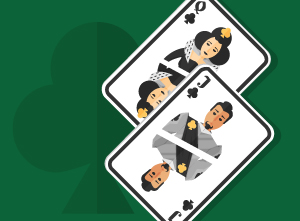 Both QJ and QJs are playable hands in many situations in both limit Texas holdem and in no limit Texas holdem. However, they must be played with control and the understanding that they can be trap hands. Most of the profit from these hands will come from straights, flushes and two pair or better hands. These hands are very vulnerable when you just make a pair. It is often likely that one of your opponents may be holding an AQ, AJ, KQ or KJ, so if you hit just a pair and any of your opponents are showing too much aggression, it is best to get away from the hand.

In limit holdem, you can play both QJ and QJs from middle position in most games if there hasn't been a raise from early position. I still fold them the majority of the time to a raise, but it does depend some on the playing style of the raiser. In most games, it is likely that you will have at least one caller behind you and then you will not have great position throughout the hand. You want to avoid being sandwiched between aggressive players with marginal hands like these.

I tend to fold QJ from middle position almost all of the time in no limit holdem, but if there has been no aggression from early position I may enter with a raise with QJs. When I do this, if I am re-raised from late position, I fold. Do not play these hands in no limit holdem from out of position against a raise. You are very vulnerable and can lose a large pot and can be forced into difficult decisions.

Both the suited and non-suited hands can be played from late position, unless there has been aggression from one of the early or middle position players. If it has been folded around to you, you should enter the pot with a raise. QJ and QJs fair very well against two random hands in the blinds. You still must be careful with these hands in no limit Texas holdem, but you will have the advantage of acting last.

If the pot hasn't been raised, you should call in the small blind with both hands. I recommend folding in the small blind to a raise, unless the raiser is weak, but I often call a minimum raise in the big blind, especially with the QJs. Once again, remember that you will be playing the rest of the hand out of position, so if you have a questionable decision you should lean towards a fold.