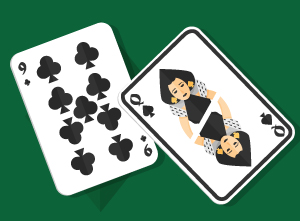 Q9 and Q9s are very weak hands and should only be played under the best circumstances. I don't play either of these hands anywhere but the blinds in no limit Texas holdem except in a very specific situation. If I am in late position, short stacked and the first one in the pot, I may move all in with Q9s in hope that the blinds will fold, but still have a small chance to win if one of them doesn't. Even in this situation, I still fold the hand over 50% of the time.

In limit Texas holdem, I only play these hands from late position and the blinds, but never when there has been a raise. These hands are just not strong enough to play for a profit over the long run and can be very costly when you hit a piece of the flop and one of your opponents has a dominant hand. Prime examples are when the flop is Q 7 5 and an opponent has AQ or KQ. In these situations you are behind by a great deal.

I suggest folding these hands 100% of the time from early position. I cannot imagine a situation where doing anything otherwise would be profitable.

From middle position, I also suggest folding both hands in every situation. It is important to realize that many of your opponents may play these hands, and you can take advantage of this. Also realize that some of the best players in the world may also be able to play these hands for a small profit from middle position, but their skills after the flop and in reading people are so good that it often doesn't matter what they have for them to play well.

I do not suggest playing either Q9 or Q9s from late position in no limit Texas holdem. In limit Texas holdem, I play Q9s about 40% of the time when there hasn't been a raise, and Q9 about 10% of the time. Do not continue with these hands after the flop unless you improve to a straight draw, flush draw or top pair or better. Even with top pair, if an opponent is betting and raising I will often fold, as it is likely that I have a lower kicker.

Play from the blinds is straightforward. If there has been a raise, I suggest folding these hands except the Q9s in limit play, and only when it looks like there will be at least three other players to the flop. If there hasn't been a raise, I limp with both hands from the small and big blind.