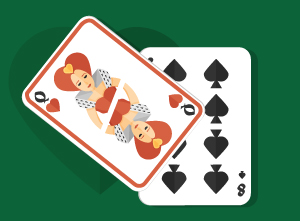 All of the hands Q8 and below are unplayable the majority of the time in both limit and no limit Texas holdem. Though Q8 can be used to form a straight in combination with 9 T J, it will never be the best possible hand and Q8s can make a flush, but there will almost always be the possibility that one of your opponents will have a higher flush. Don't get me wrong though, the majority of the time that you would hit either a straight or flush, it is likely that you will have the best hand, it just will not happen often enough to make the hand profitable.

To compound the possible troubles above, most players who are in a hand with one of these hands will lose additional money when they pair one of their cards on the flop and lose to an opponent with a higher kicker. As you will see in my recommendations below, the only place any of these hands should be played is from the blinds.

The important thing to realize is that even when you are able to play any of these hands in the blinds, unless the flop improves your hand a great deal, you must get away from the hand. You will not win enough hands with a pair of Queens to ever make it profitable to continue. If I don't flop at least two-pair or better, I check and fold with the unsuited hands and when I don't flop at least four to a flush with the suited hands I do the same.

Remember that this is just the suited hands, as I do not play the unsuited hands from middle position and I always fold after the flop if I don't improve a great deal. The only value comes from your hand being so well disguised when you do hit the flop, because no one can believe that you actually played a hand this poor from middle position. For this reason, I am much more likely to play one of these hands in a game full of better players than in a game of weak players, because they are smart enough not to put me on this hand. Even then, it is still a very questionable call, because you won't hit the flop often.

Unless the game is very soft, it is best to fold these hands from late position, especially the non-suited hands. The suited hands are also not very strong, and should never be played for a raise, nor should you play them in no limit Texas holdem. If you folded these hands every time you were dealt them, you would probably be ahead.