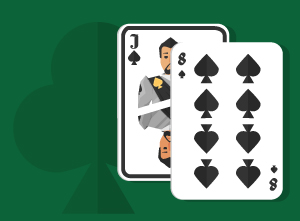 The biggest problems that these hand present are that a single pair will almost never win and when you are able to hit a straight or flush, it will not always be the best possible hand. This leads to playing these hands in a passive manner, and the best strategy is an aggressive playing style.

I do not play either J8 or J8s from early position in any game. There is no way to play them for a profit, even in the softest games.

J8s can be played in many low limit games from middle position, but the non-suited hand should be folded. If there are players who have not acted yet that are aggressive and/or raise most of the time, it is correct to fold. Playing a hand as weak as J8s out of position against an aggressive player is not profitable. If the remaining players are weak and will fold to your raises most of the time, you may consider raising to “buy the button”, but good players will not be fooled by this many times. If you are re-raised from late position, you will immediately wish you had not entered the pot at all, and possibly compound the mistake by calling the raise. When you raise to buy the button and are re-raised, the correct play is to fold. This does not agree with many pot odds calculations that I have seen, but in my experience you should cut your losses and learn from the experience.

I play J8 from late position only in games filled with poor competition. The only thing you have going for you is position, and even that can't overcome having a hand that is dominated, which will happen often. The J8s is playable more often, but remember that even when you hit a hand, you may still lose to a higher two-pair, straight or flush. I do not call raises with either hand.

From the small blind, I fold the J8 and call a half bet with the J8s. In a few games I will call a raise with the J8s, but not very often. From the big blind I fold the J8 to a raise and also fold the J8s to a raise unless I am a much better player than my opponents. You lose very little, if anything, in long-term profitability by folding to a raise very time. Be extremely careful in no limit Texas holdem with these hands. There is no reason to lose your entire stack with such a poor hand, so look for a reason to fold, not a reason to continue with the hand.